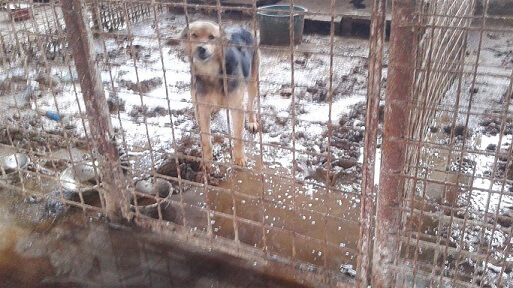 Rainbow Shelter in Brasov, Romania recently made worldwide news when its owner, Bogdan Cepoiu, left almost one hundred animals to starve to death. According to a recent report, the bodies of 30 cats and 69 dogs were found in various stages of decomposition.  A video of the tragedy was posted on Youtube on January 20, 2019.  Watch the video here

Perhaps what is most tragic in all of this are the countless unopened bags of food and toys sent to the shelter from people all over the world who truly wanted to help the animals.  Yet, the animals did not benefit from any of it.

The horror could have been avoided if the UK fundraiser had actively pursued and investigated complaints and concerns going back as far as April 2018. At that time a volunteer alerted the UK while visiting Rainbow Shelter that the dogs were not being cared for.

So, what happened to all of the money that was being raised through crowdfunding if it was not being used to care for the animals? Various fundraisers were active to generate funds for the care of the animals and to pay the shelter rent. Apparently, the money went to line someone else’s pocket, namely Bogdan Cepoiu.

A similar situation is also going on at another Romanian shelter. This other shelter is in Cluj, a city in Transylvania, Romania and has been run by Radu Termure for over ten years. During his tenure operating the shelter, he has been soliciting donations from people in foreign countries.  He’s been successful at this because they do not see firsthand the horror and filth in which the animals are kept.  Those who know him personally, however and have seen the condition of the facility and the animals, describe Radu Termure as nothing more than a scammer who uses animals to make money.

According to volunteers, who have seen the facility firsthand, the animals are kept in small, dark cages in barns or in a basement. They are rarely let outside, are fed the minimum, given water occasionally and must live in their own excrement and urine. Mr. Termure has a group of staunch supporters who say all allegations are a smear campaign and that he is a true dog rescuer and dog lover. Multiple photos and a Youtube video from the Romanian shelter seem to show otherwise.  Watch the video .

What makes this story just as tragic as Rainbow Shelters is; people have been sending money there for years hoping their donations will make the shelter more livable. Allegedly Termure does not cooperate, nor does he allocate the money for what it was intended – the animals.

One person, Mariana Iftinca, personally donated 10,000 euros and collected another 41,000 euros in donations from all over the world, but the money was not used for the purchase of the land to move the shelter as Mr.Radu Termure himself  had promised. ll. Mariana Iftinca wrote about her negative experience raising money for the shelter via a “gofundme” in June 2017. When she asked Radu Termure for copies of receipts of what the money was being used for, he could not furnish any such documents.  Read her story

According to a Facebook posting written on November 6, 2018, many financial sponsors have discontinued their assistance because Termure does not cooperate and rarely lets any of the dogs get adopted.  A Czech group that goes regularly to Romania to help the shelters there allegedly stopped supporting Mr. Termure contending he was only interested in cash and declined offers to help build a new shelter, declined offers for building supplies, food and blankets for the dogs.

A group known as Starroromania gave Radu Termure 30,000 euros but then stopped their donations because there was no improvement for the dogs. Considering the number of animals on the property, (900-1,000) there are very few adoptions from this shelter.  Some of the few dogs adopted have died within a year as a result from disease brought on by years of living in a shelter without light and covered in feces and urine. Many of the dogs coming out of this shelter have not seen the light of day in years. Their eyesight has been lost after years of living in darkness. Some have lost the power to walk after years of being confined to a cage. These afflictions render them un-adoptable.

How many dogs over the years have entered this facility in good health, hopeful and relieved they have entered a safe haven? Years later, these same dogs are broken physically and mentally from years of abuse. 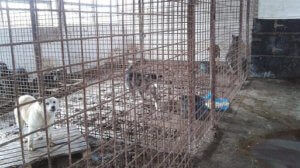 How is it possible that in a civilized city of approximately 300,000 residents, animals are trapped and forced to live in such miserable conditions? Why haven’t the authorities done anything about this and let it go on for years?  A petition was launched in August 2017 and gained 8,500 signatures, yet nothing was done. Things will not change in this shelter until an outside source for animal advocacy that has some clout goes in and  forces change; a group like PETA  or Humane Society International

Other organizations that may be able to help would be The International Fund for Animal Welfare ,  The Animal Welfare Institute or World Animal Protection.

This situation also needs qualified veterinarians to launch an investigation into the health and welfare of the dogs or any group that can push for reform at this shelter. Please write to these advocacy groups and urge them to investigate Radu Termure and his shelter.

To keep up with what is going on at the shelter and those who are pushing for change, follow the Facebook pages dedicated to exposing the Radu Termure shelter:

Something has to be done to help these dogs. We already saw what happened to the animals at Rainbow Shelter when complaints of animal abuse and neglect were ignored. The animals were carried out in bags. Don’t let Radu Termure get away with his continued abuse of the animals in his care. 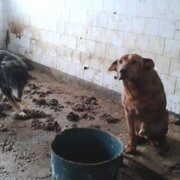