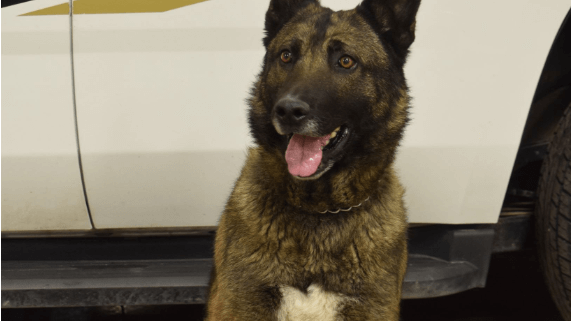 A police K9 in Utah is dead following a tragic accident. The Utah County Sheriff’s Office notified the public that K9 Havoc, a seven-year-old Belgian Malinois, died after being struck by a car. According to a press release, the K9 was with his handler on the morning of July 16 when he ran to a road and was struck be a vehicle.

The sheriff’s office writes about the July 16 incident, which took place while Havoc was on a break at a dirt parking lot along Vineyard Road:

After a few minutes of “inspection”, Havoc unexpectedly ran west toward Vineyard Road and the shore area of Utah Lake and Vineyard Beach. The handler called to Havoc but he did not respond and ran into the road.

One motorist was able to avoid Havoc, but the second was not. That car hit Havoc and he ran back to his handler at the east end of the parking lot.

Havoc’s handler transported the injured dog to a veterinary office. The veterinarian determined that the dog had not suffered any broken bones and an IV was started. Sadly, Havoc unexpectedly passed away at the office:

At about 10:30 AM, while still sitting at the Vet’s office, the handler said Havoc looked at him, laid his head in his lap, and died.

Havoc worked with the department since 2013. The sheriff’s office recounted his accomplishments:

Havoc has received many awards at various K9 trials, including his last award of 3rd place in Vehicle Narcotics search at the Las Vegas Metro Police K9 Trials last October in Las Vegas, Nevada. Havoc was the only dual purpose dog to place in this event. “Dual purpose” simply means Havoc was certified in both narcotics detection and patrol. Havoc has made hundreds of “finds” involving narcotics, including two searches where one had 10 pounds of heroin and the other had more than 10 pounds of methamphetamine. He was also involved in numerous criminal apprehensions.

When he was away from the job Havoc loved being active, whether it was chasing a ball, chewing on a toy, or playing with his handler’s family. Whatever Havoc did, he was all heart. And he will be missed.