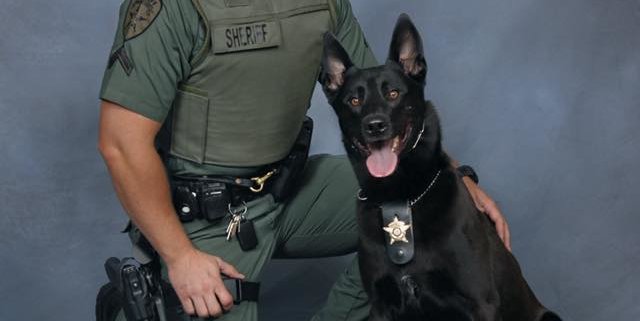 On Friday, a police K9 with the Paulding County Sheriff’s Office, was killed during a chaotic domestic dispute call in Dallas, Georgia. According to multiple sources, eight-year-old Verro, a Belgian Malinois, accompanied his handler to the scene, but he was not released by his handler from the patrol vehicle to assist.

The police K9 managed to escape the SUV in an effort to reach his handler, Corporal Brandon Kilgore. The Sheriff’s Office explains how the determined dog got out of the vehicle:

A series of tragic, almost unbelievable events followed. K-9 Verro was able to squeeze through the partially open kennel door that separates his vehicle kennel from the drivers compartment which allowed him to crawl into the front of the SUV. Standard practice when looking for a suspect fleeing on foot would be to have your vehicle windows partially or completely down so you can listen for the suspect. The front drivers side window of the patrol vehicle, a 2015 Chevrolet Tahoe, was partially down. K-9 Verro was able to inch his way out of the vehicle in an attempt to assist his handler.

Unfortunately, the other officers at the scene did not know that a police K9 was on site and during the chaotic situation, the dog wound up chasing after, and biting, a deputy who was running.

The Sheriff’s Office recounted the details in a press release:

K-9 Verro apprehended the Deputy by grabbing the back of his leg and followed his training by biting and holding until he was commanded to release. The Deputy, who had been bitten from behind while running, had no idea the dog was actually a law enforcement canine.

Unable to remove the dog from his leg, the Deputy followed his training, drew his service weapon and shot and killed K-9 Verro.

This has been a devastating incident that has shaken our office to its core. Being a former K-9 handler, I know how special the bond is between a handler and his dog.  The emotional grief everyone is going through, including the Deputy who was bitten, has been overwhelming.  Please keep Corporal Kilgore, his family, the K-9 Unit, our injured Deputy, and the Sheriff’s Office in your prayers as we all go through this difficult time.”