A necropsy performed on a mother bear, who was euthanized earlier this week in Colorado Springs, helps explain her erratic behavior. The bear was captured and put down after wildlife officials determined that she was suffering.

The necropsy on her body afterwards provided sad details of the sow’s suffering. According to Colorado Parks and Wildlife, the bear’s stomach was full of human discarded food and garbage. The wildlife agency described what was found, stating that there was: 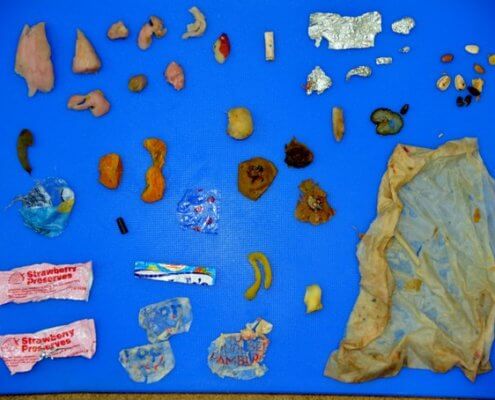 The bear was suffering from more than a stomach full of garbage – someone had shot her in the face with a pellet rifle and she also had a tumor growing in her nasal cavity. It is believed that the mother bear was shot in the face on the same day of her “erratic” behavior.

Wildlife officials believe that the bear’s cubs were old enough to survive on their own and they were released into the mountains.

Here's are two cubs, each about 60 pounds, prior to their release in the mountains today. Their mother was acting erratically Monday and found by @COParksWildlife officers to be in severe distress in a neighborhood near a school in #ColoradoSprings. She was humanely euthanized. pic.twitter.com/qIbIQNwQGj

After two months, injured pup continues to wait to be saved from shelter
Scroll to top