A dog, so badly neglected that he was likely days away from death, was rescued days ago in Putnam County, New York, and his owner was arrested. The Putnum County SPCA reports that 30-year-old Omer Fahim, of Dean Road in the Town of Kent, was arrested on July 13 for the neglect of his Great Pyrenees.

According to the animal welfare agency, the four-year-old dog was “familiar to the Dog Control Officer” because he had been spotted loose in the area on multiple occasions. Because of the dog’s pitiful condition on the most recent encounter, the officer transported the dog to the Carmel Animal Hospital for treatment.

A veterinarian noted that the dog was in a “severe state of neglect,” and determined that he was likely within days of dying. Feces and urine so badly matted the dog’s coat that he was unable to easily produce bodily waste. The dog had maggots coming from his nose and his nails were so overgrown that they were curling under into his paws. 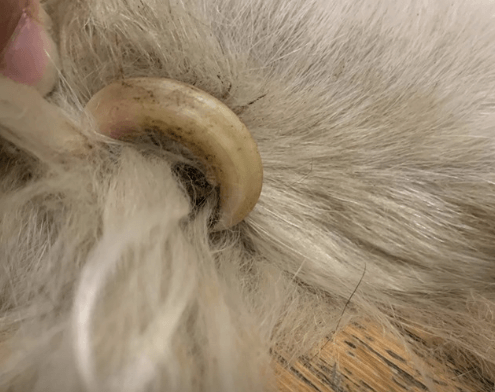 Officers with the animal welfare agency investigated and deterimed that Fahim has allowed his dog to fall into this dismal state of neglect – after being interviewed, the man was placed under arrest and charged with animal cruelty.

The dog is receiving veterinary care and he will be placed with a Great Pyrenees rescue group when he is healthy enough to leave.

Yesterday: Couple kisses in disturbing photo taken after their kill of magnificent lion