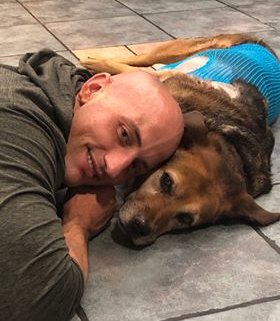 In the current days of negativity and animosity, when acts of violence and anger fill the newspapers and resound from our television sets, we are all looking for a hero.  Not a caped crusader who fills a larger than life movie screen fighting off fictitious villains, but someone who will restore our faith in humanity and reinforce our belief there is still good in the world.

But Kris’s journey started long before that. It all began 11 years ago when he went into the SPCA of Tampa Bay and met Jordan, a three-and-a-half-year-old female dog.  Jordan, like so many other dogs, spent her entire life in the shelter system. She was bounced around a lot and had never known life outside a cage; that is until Kris came along and adopted her.

Jordan lived with Kris for eleven happy years.  She was more than just a pet. Kris was quoted as saying

“Jordan did more for me than any human I’ve ever known.”

Tragically, Jordan succumbed to cancer in October 2018. Kris was devastated but wanted to do something to honor Jordan and her early struggles as a shelter dog. So, Jordan’s Way Charities Corporation was born.  According to their mission statement:

Jordan’s Way Charities Corporation is a 501c3 non-profit organization operated with the sole purpose of raising funds to feed shelter dogs throughout the United States. The company’s mission is to be able to provide a full year’s worth of dog food to every animal shelter that needs assistance in providing a safe haven for neglected, abandoned, or surrendered dogs until they can find a forever home.”

On January 2, 2019 Kris journeyed to Arkansas where he delivered 500 bags of Purina dog and cat food to the shelters there. Watch the amazing journey and delivery here .

In addition to traveling the country and delivering food to animal shelters in need, Kris came up with a unique way to call attention to his mission and raise money for Jordan’s Way. From April 27, 2019 to April 29, 2019, Kris, pulled, flipped and pushed a 250-pound tractor trailer tire for 13 miles from Contour Fitness in Palm Harbor to Clearwater Beach. This was no easy feat, but Kris wanted to demonstrate his commitment to raising money to feed shelter dogs across the United States through his charity.

In an interview about the stunt, Kris stated

“I want people to witness something that shows the love I had for my dog. Jordan did more for me than any human I’ve ever known. Yes, I have strength from years of bodybuilding and power-lifting, but my love for her is what will supply the power and drive me to succeed,”

The event was streamed live on Facebook. Kris hoped that by performing this feat, people would watch and hear about it and donate to his charity. Kris plans to repeat the tire rolling stunt in the middle of May. This time it will be done at Indian Rocks Beach, Clearwater Beach, and Mediera Beach in Florida over the course of three days.

The end goal for all of this is to raise three million dollars. That amount will help get Kris and his team on the road weekly delivering a year’s worth of food to shelters anywhere in the country. Shelters of all sizes will benefit from this whether they have 50 dogs in their care or 200.

Kris made another Youtube  video showing his plan for Jordan’s Way and his desire to ease the suffering of shelter pets. Jordan had a profound effect on Kris’s life, and he is determined to pay it back to her and honor her memory by seeing that no shelter dog goes hungry. He will continue to perform stunt after stunt to raise awareness and money for his mission.

He is also working with one of the top dog food companies in the U.S. who has promised to match Jordan’s Way dollar for dollar on all donations once they reach the $500,000.00 mark. But Kris cannot do this alone. He needs the help of many generous people who love dogs as much as he does.

There are many ways to donate to help Jordan’s Way. Through Paypal at jordansway1001@gmail.com. 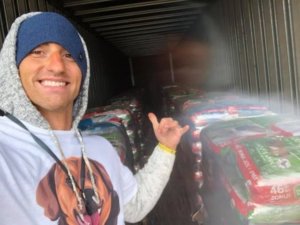 You can also contact Kris Rotonda directly at 727-735-1093 or via email at Kristopherrotonda@gmail.comn

Over eight million dogs and cats enter the shelter system in the United States each year.  Many suffer greatly and never know the joy of a loving home.   Kris may not be able to fix that problem, but he is committed to fixing the problem of feeding them and will not quit until no shelter dog goes hungry. 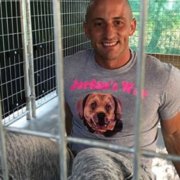 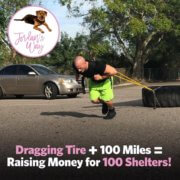 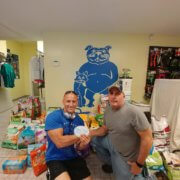 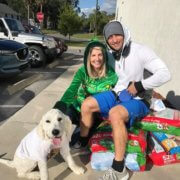 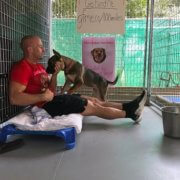