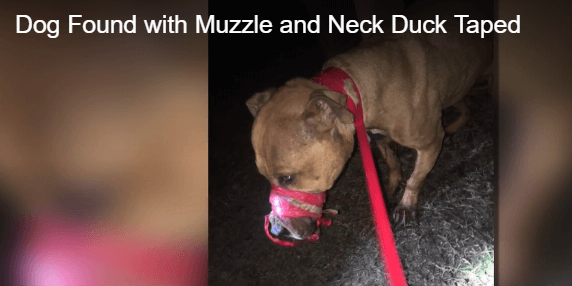 An injured dog, bound in red duct tape, was found in Arkansas on Monday night. The small, brown pit bull was discovered by a good Samaritan, who spotted her limping near a gravel road, outside of Monticello. Kaylin Frost told KARK News, “I just cried I didn’t know what else to do.”

Frost called for help –  Drew County Sheriff’s deputies, friends and Frost’s mom arrived and the team was able to get the red tape removed from the dog’s muzzle and neck. After being freed from the duct tape, the frightened pup bolted away, but she was captured on Tuesday.

The authorities believe that she may be part of a local dog fighting operation…her body, which is thin and battered, shows signs consistent with the cruel blood sport. It is unclear if she fell from a vehicle, or was abandoned near the area where she was found.

Anyone with information about the dog is asked to contact the Drew County Sheriff’s Office.

(Screenshot of dog via KARK News)