In Pinson, Alabama, a hunter surrendered to authorities on Friday after allegedly shooting two dogs chasing a deer. David Green, 47, faces two counts of animal cruelty and theft of property.

According to the Valley Times, the incident occurred  on property near the Ridge Grove Hunting Club. The owner of the dogs had been hunting on the club’s property when his two dogs ran off the property to chase a deer. The dogs were out of sight when the owner heard the first gunshot. The dogs wore GPS collars and were tracked, but as the owner neared the location, he heard multiple shots.

As the owner approached, he heard one dog whimpering and called authorities with the Conservation Enforcement Officer John Davidson. One dog died, and the other dog was taken to a veterinarian where he underwent surgery to have a leg amputated.

The law states if a dog leaves the club’s property, the person in the other area can catch the dog and report the collar information to the club. The problem is however, if a hunting dog is chasing a deer, it only knows to pursue its prey and has no idea of property lines.

Joey Gillenwaters, president of the Chambers County Alabama Dog Hunters Association states there are other ways to deal with dogs on a property and it isn’t killing them.

“This is not something we are going to tolerate in Chambers County. Just because a dog is on your property, it doesn’t mean you can kill them,” Gillenwaters stated.

The association is pushing for legislation to make it a felony to kill a dog and a felony to remove a collar of any kind.

Yesterday: Abandoned dog ‘near death’ when he was found in garbage tote – more here.

More: Someone abandoned cat in a carrier in the bitter cold – more here. 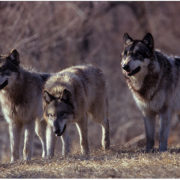