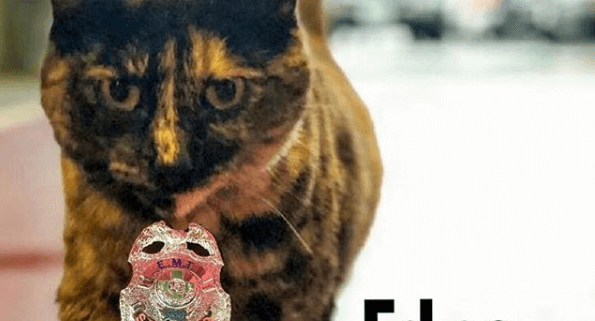 Firefighters with a San Francisco fire department are being forced to say good-bye to a feline friend after someone complained about her living there. The San Francisco Fire Department has released a statement about the cat, whose name is Edna:

The City received an anonymous complaint regarding a cat in the SFFD workplace at Station 49.

Multiple media outlets reported that Edna was living in a firehouse, but the release has clarified that she is actually at an ambulance deployment facility. The release explains concerns over public health and safety:

Within this facility is Department Logistics, where medical supplies, equipment
and pharmaceuticals used by ambulance staff to provide crucial lifesaving emergency health care are housed. In response to the complaint, an independent investigation was conducted and concluded that having the cat in the facility compromised the sterility of supplies, equipment and pharmaceuticals used on patients. Public health and safety concerns counseled removal of the cat from the premises.

According to the department, Edna had to leave not only for the public’s safety, but for her own. They explained:

Part of the reason that this Policy was adopted was for the safety of the animals, given onsite activities that routinely involve large apparatus and machinery operating under emergency conditions.

Before Edna got the official boot from station 49, the firefighters had launched a campaign for her to stay. On Edna’s Instagram account, #Ednastays, along with requests for help from the public, were posted – but the efforts were not enough for the four year resident of the facility to remain.

Irene Ybarra, a paramedic at the facility, told SF Gate that Edna had her own special area, and noted that she was not allowed near supplies. She said:

When I was at Station 49 I developed the medical supply in such a way that Edna was not able to get into the clean room. The items are usually boxed up, and it’s not something [Edna] is usually in the habit of getting on top of. She had her own specific spot, a box with blanket in it. Edna has never been a issue.”

Though the press release indicates that Edna has already secured a new home, Ybarra said that is not true and an appropriate home is still being sought.