You are here: Home1 / News2 / Dogs3 / Family of Michigan pit bull fight to save his life 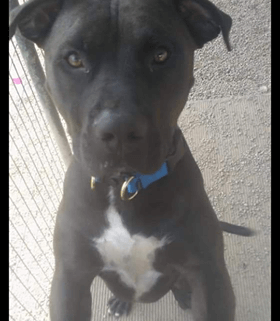 In a recent news story on WILX channel 10, the state of Michigan declared itself a no-kill state for shelter animals. Ironically, the family of a pit bull named Tato are fighting to have the life of their dog spared.

Tato is accused of attacking a small dog belonging to a neighbor. The neighbor was walking her dog Piper when Tato escaped his owner’s home by pushing out a window screen. This incident occurred on April 8, 2019 and now the 57th Judicial District Court in Allegon County, has ordered Tato be labeled a dangerous dog and euthanized.

Attorney Celeste Dunne, who recently represented another allegedly dangerous dog named Boomer, is representing Tato’s family. According to Katie Lopez’s (Tato’s owner) court testimony from a hearing on July 30, 2019, Tato was adopted by the Lopez family in March of 2019. They got him from the Detroit Animal Control Center when their other dog had to be out down due to illness.

They chose Tato, because according to the shelter staff, he was not aggressive and got along well with kids and other dogs. This was important to the Lopez family because they had three children living in the house, a 12-year-old, an 11-year-old, and a three-year-old. They also have a small Yorkie.

For approximately three weeks, Tato lived with the Lopez family. He never showed aggression to their youngest child, even when that child poked him and pulled on him as children are prone to doing. He has also never shown any aggression to other children who visited the house.

Tato got along fine with the small, female Yorkie. According to Katie Lopez, Tato will play with her if she wants to, and he will leave her alone if she doesn’t want to play. She kind of goes at him a little bit, and he will kind of nudge her off if he isn’t in the mood. The Yorkie calls the shots with the bigger dog.

Another witness, Deputy Halstead of Animal Control also stated that Tato was friendly and licked his hand the day he came to collect Tato on July 16, 2019. He also stated Tato was very cooperative and got into the truck with no issue. It was only at the shelter when he saw and heard the other dogs that he became agitated and aggressive.  Tato returned to his friendly personality once he was away from the other dogs.

According to the injured dog’s owner, Kimberly Joy Nienhuis, she had been walking her dog Piper, a Shih Tzu, Bichon, and poodle mix weighing about 18 pounds.  She was walking the dog with her daughter and two other dogs when they met up with some friends. They stopped to talk in front of the Lopez house when Tato broke through the window and charged at them. He clamped down on Piper’s ear and was shaking her as everyone tried to separate the dogs.

The dogs were finally pulled apart, and Piper had injuries to her ear. Kimberly Nienhuis filed a police report and took Piper to the emergency vet where she was treated.  The little dog did survive.

Tato’s attorney Celeste Dunn stated that the Dangerous Animal Statute which Michigan enacted in 1988 defines a dangerous animal as a dog that attacks or bites a person, or a dog that bites or attacks and causes serious injury or death to another dog. Serious injury is defined in the statute as “a permanent, serious disfigurement, or serious impairment.” There was no evidence or testimony that Tato turned his aggression on any of the people present that day.

Ms. Dunn further argued that the injuries sustained by Piper did not meet the dangerous animal criteria. However, despite arguments and testimony on Tato’s behalf, Judge Daniel Norbeck sentenced Tato to be euthanized.

Tato who spent half his life in a shelter, only three weeks with his new family before the incident and only four months with them afterward with no other acts of aggression, was going to be killed. He was then taken to Make a Difference Rescue while a stay of execution was requested.

On August 19, 2019 Judge Baillargeon also sentenced Tato to be euthanized.  On September 11, 2019, a reconsideration was denied and on September 13 an appeal was filed.

Based on everyone’s testimony, it is apparent this was most likely an isolated incident.  According to the Michigan Dangerous Animal Statute, the punishment does not fit the crime.

It is very sad what happened to Piper. No one wants to see any dog attacked or harmed, and it was a frightening incident for Piper’s family. But the little dog is okay thankfully with non-life-threatening injuries to her ear.

Tato should not be euthanized when this was only a one-time incident, and there are alternative courses of action. The Lopez family is willing to do whatever protective measures they have to, including putting up a fence and keeping all windows locked so Tato cannot escape again. They will do anything to save their dog.

We cannot keep killing dogs that have one bite incident.  It will create more unnecessary breed hysteria, clog up court dockets and too many animals be given a death sentence unnecessarily.

There is a GOFUNDME set up to help Tato’s family with legal costs.

And a petition requesting Tato’s life be spared.

Yesterday: Dozens of wild horses swept away in Hurricane Dorian

‘Perfect’ family dog to be killed tomorrow after owners surrendered...

‘Hannah’ hides in corner pretending she can’t be seen at crowded...
Scroll to top