A duct-taped dog, thrown into a ditch in freezing temperatures last weekend, has been reunited with his owner. According to multiple sources, the dog, whose real name is Flick, was back in his owner’s arms on Friday. 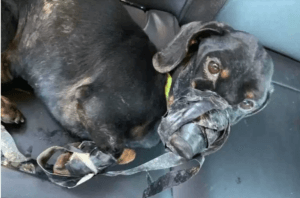 Ivan Animal Hospital, which had been caring for the rescued dog (initially dubbed Jimmy), informed Facebook followers about the reunion on Friday:

We were waiting to get Jimmy’s owners consent before we made a public post. His owner told us he had broken his leg in the past and we got his previous x-rays and took new x-rays this morning and they matched up perfectly. We can assure you that this is his real owner and she was in tears exited to see him this morning to verify it was actually him.

When she sat down on the ground he walked right up to her and had all the tail wags. Then he plopped down right in front of her and started whining because he was so excited.

As reported by Fox 2 News,  Kaitlynn Kofron has been identified as the dog’s owner – she commented on her guilt over what happened to her pet:

According to Kofron, Flick disappeared moments after being let outside.

A man has been arrested in this disturbing animal cruelty case.  39-year-old Paul Garcia, a man who lives near Kofron, was arrested and charged with animal abuse and armed criminal action. As reported by the St. Louis Dispatch, Garcia allegedly threw the duct-taped dog out of a car window in Jefferson County on Saturday. The dog was discovered by a deputy approximately 12 hours later.

The police were able to make an arrest after pulling Garcia’s fingerprints from the duct tape that was removed from the dog.