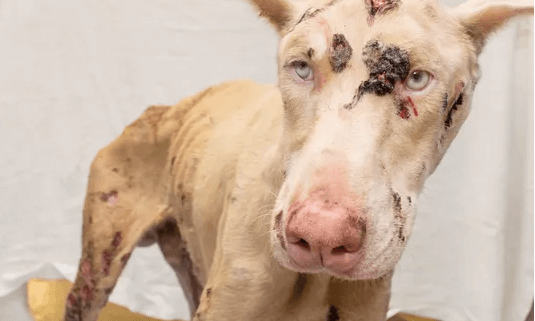 The charges have been reduced for a man who is accused of starving his dog. As reported Cincinnati.com, a jury lowered 36-year-old David Neanover’s fifth-degree felony charge of cruelty to a companion animal to a misdemeanor cruelty charge.

Neanover’s dog, a two-year-old Doberman named Lucifer (Lou) was in such poor condition that he died shortly after being removed from Neanover’s home in April. The dog was taken in by Animal Friends Humane Society – the agency has expressed dismay over the grand jury’s decision to reduce Neanover’s charges:

We were devastated to hear of this news late last night. The charges have now been lowered back down to a misdemeanor in Lou’s case! 😡

The Grand Jury in this case did a pathetic job of holding David Neanover accountable for Lou’s horrific condition and ultimate death. When will our society wake up and come to the realization that we can no longer allow animal abusers to get away with these crimes!

Lucifer lived on a short chain, and was so deprived of food that he resorted to eating rocks, reports WCPO News.

The animal welfare agency hopes to find out why the grand jury made the decision they did – they stated:

We’re still digging into why the Grand Jury made the awful decision that they did, and we’re also waiting on news of when David Neanover’s next court appearance is scheduled for. We will share our findings once we have more information. Thanks to everyone who has followed this case and been a voice for Lou and the many other innocent, abused animals.