There is so much outcry and advocacy to shut down puppy mills. Large animal rights groups such as HSUS, ASPCA, and PETA all use anti-puppy mill statements and slogans as one of their main platforms.

But where is the line drawn between a puppy mill and a “bad breeder?” A breeder who has a breeder’s license or a dealer’s license yet is irresponsible and negligent in their duties as a breeder often results in sickly animals who pass away shortly after purchase.

An Amish commercial breeder, Lloyd Yoder, located in Riverside, Iowa was approved for a breeder’s license but according to a news stor, the Iowa Department of Agriculture cited several concerns. According to an Animal Welfare Inspection form completed on Lloyd’s breeding facility, known as Sunset Valley Meadows, it was noted there was not enough space for whelping, there were ventilation problems, the whelping area, and the dogs were not kept separated from the poultry. It was also stated that the number of personnel was inadequate for the amount of care needed for the animals.

The report also recommended reducing the breeding population to no more than 60 dogs with selective breeding.  An insider, named Danielle Wegter, has been trying to call attention to the horrific conditions at the Sunset Valley Meadows but has been met with resistance.  Wegter’s mother used to work as a photographer. During their time on the property they observed dogs being left outside in -50 degree weather.

The majority of the puppies raised are born sick and often die before they are eight weeks old.  Most of the common illnesses are parvovirus, distemper, pneumonia, giardia, coccidiosis, fleas, ear mites, blindness. Some of the pups have mange and are missing parts of their tails. The dogs generally live in their own feces, mothers are locked in whelping crates with puppies for days on end. Lloyd houses his pregnant dogs in with the chickens.

According to images captured by Wegter’s mother, dogs are kept on a hillside in large fenced in areas with no adequate shelter, or water.

One of the most disturbing photos to surface from Sunset Valley Meadows was that of a blind mother dog lying in a filthy, feces filled cage. Other photos include puppies huddled in the corner of other filth ridden cages.

In an interview with Danielle Wegter, she stated that since Lloyd Yoder lives staunch Amish guidelines, there is no light in the dog kennels or electricity; just various heating elements which often cause the puppies to suffer burns and other injuries such as missing tails. She also confirmed as did the Animal Welfare Inspector that the whelping crates were too small, and because of the close proximity to the chickens and no ventilation, the puppies often become sickly and die.

Wegter herself has several dogs she took in from Yoder because they were sickly.  Murphy, the first dog had pneumonia, seizures, intestinal parasites, and four inches missing from his tail. Lady and Dolly also came with multiple issues. Dolly couldn’t walk until she was 13 weeks old. Both dogs are terrified of men and Lady often hides under the bed.

Since Danielle posted her story, several other people who purchased puppies from Lloyd Yoder also came forward stating their dogs had illnesses including arthritis, and hip issues, at only nine months old.

Unfortunately, Lloyd isn’t the only Yoder breeding dogs in unhealthy conditions. According to a report in the Barkpost,  mentioning the 100 worst puppy mills in Iowa, Clayton Yoder, Lloyd’s uncle, who owns a kennel in Iowa was also cited. According to the report, puppies were found shivering in the cold; others were found inside a dirt hole.

In a report by the Companion Animal Protection Society (C. A.P.S),  Clayton had 126 dogs and 18 puppies on his property.

“Flies were inside and around the kennel (3.11(d)-Pest control).

The surfaces of the indoor cages had a dirty build-up on them, especially on the floors (3.1(c)(2)-Surfaces). Some of the floors showed more than a day’s accumulation of feces (3.11(a)-Cleaning of primary enclosures).

A strong ammonia odor was in the air inside the building (3.2(b)-Ventilation).

There was several weeks’ accumulation of feces piled underneath the cages, attracting a large amount of flies (3.11(a)-Cleaning of primary enclosures); (3.11(d)-Pest control).

A PVC pipe delivered water for all of the dogs. The water appeared dingy, and the inside of the pipe was covered in algae and a brown residue (3.11(b)(2)-Sanitization).”

If all of these things have been cited by various organizations, why are Lloyd and Clayton Yoder still allowed to continue breeding in conditions that are comparable to the worst puppy mills? When Danielle Wegter sent a complaint to the Johnson County Sheriff’s Office, along with photos of the deplorable conditions at Sunset Valley Meadows, she received a response stating an investigation was conducted and there was no wrongdoing.

It is time to take these complaints to the next level by writing letters to USDA via their website. 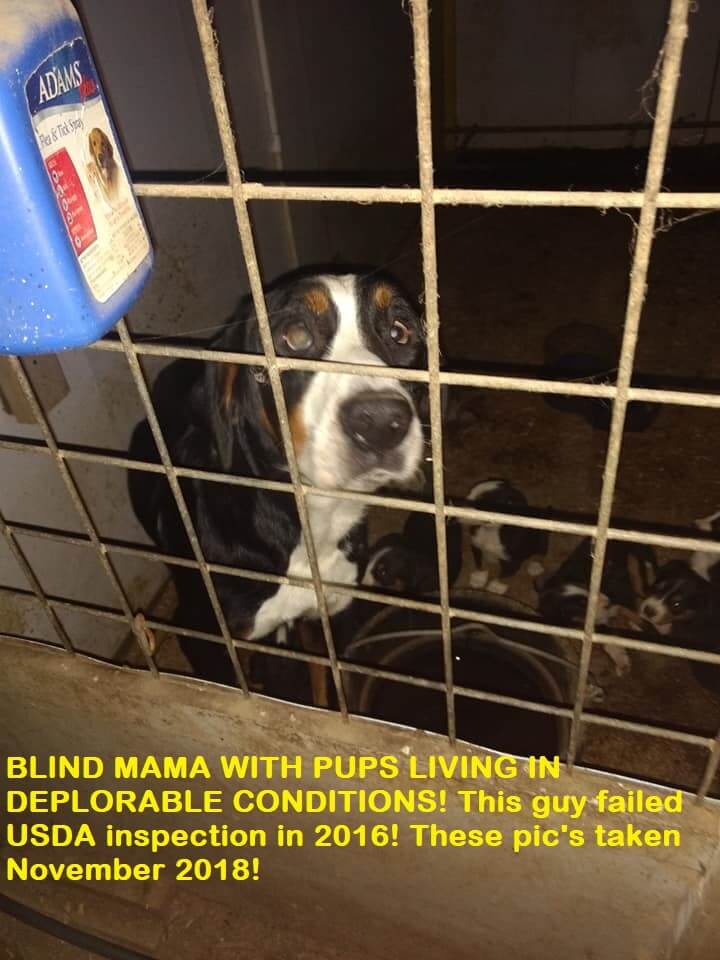