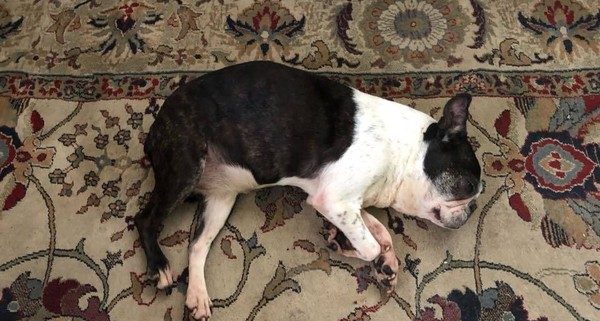 The woman who dumped a 15-year-old blind and deaf dog in Teterboro, New Jersey, has been arrested and fined. Fort Lee resident Tania Connelly, 59, was arrested thanks to a good Samaritan who saw what happened and snapped a photo of the car and license plate.

The elderly dog, Bruna, who was abandoned by Connelly was picked up and taken to the Bergen County SPCA for care. Bruna was surrendered to the shelter after Connelly was tracked down and signed forms relinquishing ownership. The senior dog has since been taken under the wing of Pet Resq Inc.

Connelly admitted that she had left the dog alone – but claimed that she planned to return to pick her up later. She was charged with inflicting unnecessary cruelty on a living animal. Connelly was fined $750 on Monday reported the Daily Voice.

On Monday, the Bergen County SPCA posted a statement to Facebook about the dog who had been cast aside:

Bruna got lucky with all the people involved with this case from the woman that took the photo, the man that found her, the the shelter that housed her safely and Robyn Urman for providing her with a loving home. She had and still has a lot of guardian angels looking over her.

Yesterday in the news: Dying hope – after 2 years at shelter, dog resigned to her fate; more here.

She gave up…then this!

Abandoned in the Everglades…

North Carolina animal shelter posted 13 dogs would be euth’d if not a...
Scroll to top