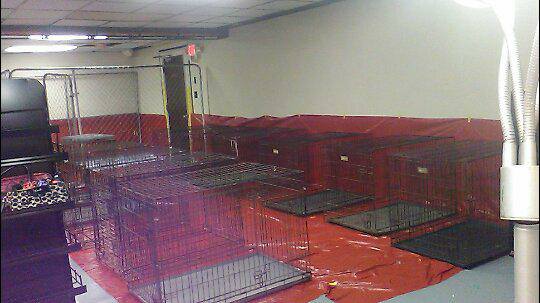 A North Carolina woman who stepped up to take in pets who were in danger from Hurricane Florence may now face charges for her good deed. According to multiple sources, Tammie Hedges, of Crazy’s Claws n Paws, took in cats and dogs from families in areas due to be impacted by the massive storm, and now local officials want to charge her for operating an unregistered shelter.

Hedges took in a total of 27 cats and dogs who were in danger of drowning – the animals were housed in cages at a warehouse on Route 581, reported WAVY News. She told the news agency why she offered to care for the pets:

“The goal was to make sure they were not out there drowning. We had an elderly couple, they were evacuating that afternoon, and there was no way they could take 18 animals with them.”

Despite the dangerous situation, county officials apparently wanted pets to only be in “registered” shelter space. After the storm passed through the area, Wayne County’s animal services manager Frank Sauls phoned Hedges and informed her that the animals had to be turned over or he would obtain a warrant. Though Hedges surrendered the animals, she may still be charged.

Though Hedges has acknowledged that the warehouse space was not a registered shelter, she believes that what she did was right. She said, “We’re not just gonna let (the animals) suffer and die and drown.”

Outraged by what is happening? You have the ability to voice your concern over the situation to county officials:

Sweetest cats cuddle each other in animal shelter cage

Registered sex offender accused of sexual ‘misconduct’ with a d...