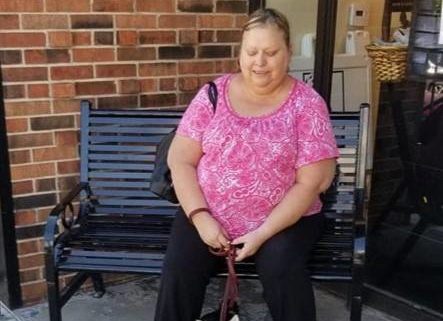 Shortly after asking a Missouri rescue group to find a new home for her dog, a cancer-stricken woman committed suicide. The heartbreaking news came just a day after Stray Rescue of St. Louis posted a letter written by 46-year-old Crystal Chrisp.

On Monday, the rescue group had posted two photos – one of a senior dog named Shell, and the other of a letter from Shell’s owner, asking for a loving new home to be found for the dog.

In the letter, Chrisp explained that she had lost her battle with cancer – she wrote, “I need for my baby girl to be taken care of in a home…In these days all I do is worry about what’s going to happen to her. I love this girl, she is my daughter.”

According to Fox 2 News, Chrisp’s body was discovered on Tuesday inside of a burning apartment in Affton.  Chrisp had died from a self-inflicted gun shot wound.

Chrisp’s dying wish was that her beloved dog would find a new home – and she did. According to the rescue group, Shell has already been adopted. The agency wrote:

“A wonderful lady saw the news segment and knew it was time for her to adopt after losing her Stray Rescue dog Trenton, in July. She just felt so drawn to her. Wasting no time, she filled out an application and was here the very next morning. The two of them hit it off and she knew it was definitely the right time. She says Shell is already running the house, and that they are inseparable. We are honored to have fulfilled the final wish of her Mom, who is no longer with us. We promise she will be spoiled for the rest of her life.”

Sharon Hyster-Harris was friends with Crystal Chrisp. Hyster-Harris told KMOV News that Chrisp had beaten breast cancer several years ago, but she recently learned that the cancer was back. She said, “I think she just decided she couldn’t deal with it anymore.”

This shepherd got his happily ever after!

Yep, they are clever!

Friendly dog’s mouth ripped apart when he went to say hi to another dog...
Scroll to top