You are here: Home1 / News2 / News3 / When too big is a good thing: Knickers the steer spared death sentence 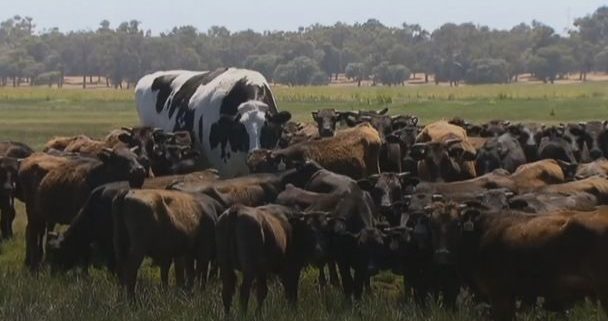 A giant Australian steer named Knickers is just too big and has been spared the death sentence. His sensational photo towering above every other cow in the pasture on a farm in Perth has brought him international fame.

Wondering how big this boy really is? The 6-foor-4-inch, 3,000 pound steer is too big to be chopped up into hamburger meat at the slaughterhouse. His owner, Geoff Pearson said the seven-year-old steer will live out his days on the 3,000-acre property. 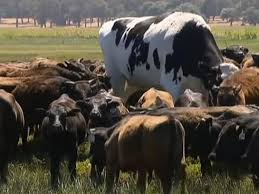 “They all look up to him, obviously, and wherever Knickers moves, they move, and he’s pretty much just the leader of the pack and coaching everybody where they need to be going,” stated the cattle owner.

According to The Sun, the Holstein Friesian steer would be too heavy for the machines, would actually drag on the floor of the slaughterhouse which would lead to contamination and his cuts of meat would be too large.

So for the rest of his life, and even as he is still expected to grow more, Knickers will “coach” the regular sized cattle as where to graze. In  the meantime, the huge bovine has an Internet full of followers who have even admitted to being “obsessed” with the “beefy boy.”

Enjoy your life Knickers and do keep growing. Perhaps you will break the current Guinness World Record Holder – Bellino -that lives in Rome and is 6-foot-7 inches?

No remorse from man arrested for fatally shooting neighbor’s caged do...

California rescue has one wish for Christmas: Find Lucy a home
Scroll to top