A horrible case of animal cruelty in Louisiana has resulted in the untimely demise of a dog who deserved better…so very much better. The Webster Humane Association announced the offering of a reward for information leading to the arrest and conviction of the person who threw a dog onto an interstate – leaving her to be hit and dragged by cars. 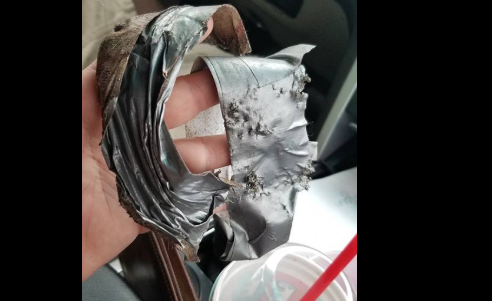 The dog, dubbed Faith, suffered horrific injuries – including multiple skull fractures and widespread road rash. After the authorities found Faith, she was picked up and rushed to Claiborne Animal Clinic – though it was after regular business hours, the veterinary staff opened its doors to take her in. The agency wrote:

Many thanks to Dr. Tinsley and Mrs. Tonya for meeting us there after hours and caring for her. She knew a gentle touch in her last hour.

Webster Humane Association is offering a $2500 reward for the arrest and conviction of whoever is responsible. Anyone with information is asked to call 318-377-7433. All calls are confidential.

We will not just let this go!!! We will not stop looking for you!!! We will make sure Faith gets justice. Please share! Anyone with information please call.

Faith was thrown out near mile marker 40 (Goodwill exit) eastbound on I-20 with her legs duct taped together where she was run over and dragged down the interstate.  The collar, rope and duct tape were confiscated.

Yesterday in the news: Handsome shepherd under the weather and at risk – more here.