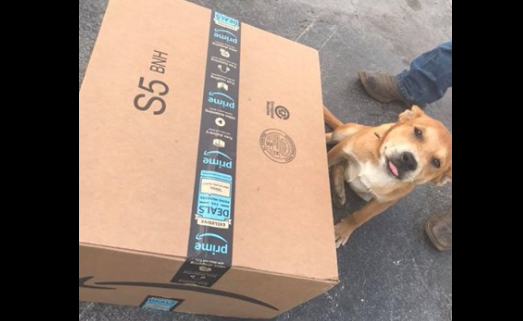 An Amazon contractor was either careless, or purposefully cruel, when he dropped a large package on a puppy inside of a family’s fence. The surveillance video which captured the incident was posted to social media on Thursday – the puppy’s outraged owner wrote:

This guy from amazon threw a package right on my puppy and you can tell it was on purpose, he didn’t even care. Please share the hell out of this.

The video shows a man walking up to a chain link fence and dropping a large box over the fence – apparently directly onto the pup. According to the Miami Herald, Amazon has fired the delivery contractor and released a statement about the situation:

“This does not reflect the high standards we have for delivery partners, and this individual is no longer delivering Amazon packages. We have reached out to the customer with our sincerest apologies and to offer our support.”

While some people have stated that perhaps the driver wanted to put the package inside of the fencing for the purchaser’s protection, the pup’s owner has other views. Brittany Aaron, the puppy’s owner, stated:

“I just don’t see why he would purposely do that when he could of put it by the garage door or front door. There was no logic in what he did. He clearly knew what he was doing.”

According to Aaron, the puppy appears to have a “squinty eye” after possibly being hit with the corner of the 7-pound box.

This guy from amazon threw a package right on my puppy and you can tell it was on purpose, he didn't even care. Please share the hell out of this.

In other news: Faithful dog waits outside of hospital where owner died months before

Man charged for choking roommate’s dog, who pooped on a rug