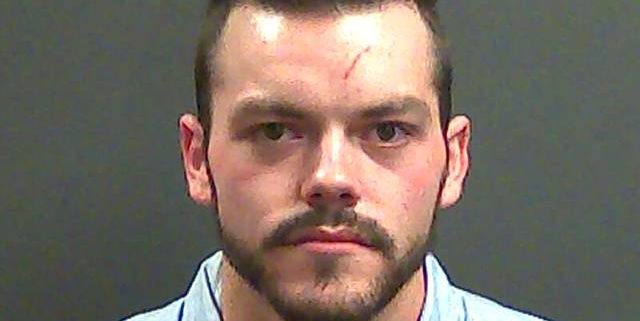 In Marion, Indiana, the man accused of beating and torturing a puppy after a domestic violence  situation with his girlfriend faces nine charges. Justin Sollars, 23,  was arrested on Thursday and has been charged with domestic battery, criminal confinement, four counts of animal cruelty including felony animal cruelty and invasion of privacy.

“Shorty”, the 20-week-old Welsh Corgi puppy suffered; this little dog became an innocent victim of  the domestic violence on Monday when he was rescued by the Marion-Grant Humane Society in Marion, Indiana.

In retaliation against his girlfriend, Sollars allegedly beat Shorty because he urinated in the house. And as the dog cried out in pain from the abuse, his torturer put rubber bands around the dog’s mouth and continued to beat him until the defenseless pooch fell unconscious. The cruelty still wasn’t over. The abuser then stuffed Shorty into a trash bag and dumped him in the yard of his girlfriend. He texted the woman and told her he left a present for her at the location where she had been living.

According to the Chronicle Tribune, Shorty suffered injuries to his brain and spinal chord. Although he has since improved and is mobile and eating, an MRI revealed on Saturday the puppy has fluid in the brain and those caring for him are being “cautiously optimistic.”

The Marion-Grant Humane Society has set up an account to help Shorty. If you would like to help, you can donate to Marion Grant County Humane Society, 505 S. Miller Avenue, Marion, Indiana or Riverside Community Federal Credit Union, 101 N. Washington Street, Marion, IN 46952.