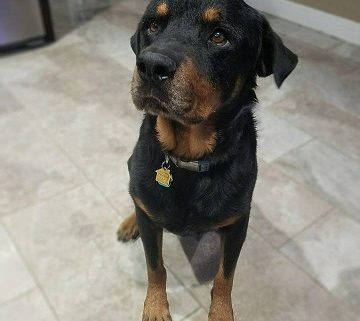 Tequila, an approximately four-year-old male Rottweiler was living the good life with his owners until they decided they wanted a divorce. Prior to that decision, he enjoyed all the comforts and luxuries of an indoor dog. But all that changed when his owners decided, not only did they not want the responsibility of being married, neither one wanted the responsibility of having a dog either.

So, they left him outside, tied up day and night, and only fed him a few times a week. Humans and Animals United intervened on Tequila’s behalf and offered to take him, however, they were told his owners had already found an adopter for him. That was short lived. After only a week, the people who adopted him said he didn’t get along with their dogs, and once again he found himself tied up in a backyard.  Humans and Animals United decided they were not going to let him suffer the same fate as so many other unwanted dogs; that is being passed around from home to home and eventually ending up in the shelter system.  They immediately stepped in and took him.

Since then he has been living in a foster home with Chris Casale and his wife.  Chris describes Tequila as a super sweet, but very timid and shy dog. He has opened up some since living with the Casales and will often get small bursts of energy, then quickly calm down. Tequila especially loves going for walks, and is both crate and house trained. He occasionally gets anxious when crated during storms or loud firework displays.  He is well-behaved when allowed to roam the house unsupervised.

Due to Tequila’s shyness, he will need an owner who can provide a structured environment and predictability for him to settle into easily.  He is uneasy about body handling and is scared of any gestures that may appear threatening to a dog such as face to face contact or hugging. Because of these fears, he has been successfully trained to wear a basket muzzle when going to the vet.

Tequila will benefit from an owner willing to give him the time, respect, consistency and space that he needs and deserves.

When it comes to other dogs, Tequila has had several negative encounters. This is most likely due to the difficult life he has had; filled with so many changes, making it harder for him to adapt and feel comfortable in a new environment. Because of this, it would be best being the only dog in the household.  However, he may do well with a laid-back female dog. This would have to be determined during a meet and greet with a potential adopter.  It is unknown how he will react to cats as he has not been around any.  Also, he can not be placed in a home with young children.

Tequila knows how to walk on a gentle lead head collar as well as how to sit and lie down.  Whoever adopts him will also receive one free session of training under RotNDog Training and Behavior Consulting in addition to discounted follow up sessions.

What Tequila really loves is to just hang around with his humans and relax. He is a very special boy who is looking for a special home; a home where he won’t be left tied outside because no one wants to take care of him anymore, and a home where he will have his space and be surrounded by loving, caring people. Tequila is currently residing in his foster home in Broward County, Florida. They are looking for a good home for him within a few hours driving distance of where he is now.

Although this sweet boy was rescued from a life of misery tied up in a yard, he won’t truly be rescued until he finds a forever home.

Yesterday in the news: Loss of job forces couple to move – now all of their foster pets need somewhere to go.

Best I love you attempt ever!