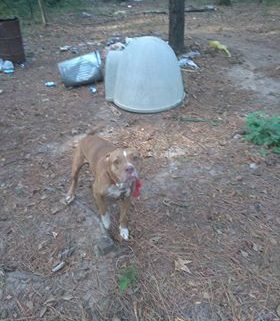 Residents of a mobile home in Bownan, Georgia recently left the property abandoned along with their two dogs. According to a neighbor, Lynit Patterson-Sallions, the residents were struggling financially, but that is still not an excuse to abandon the dogs.

Living in the household were two adults, two adults who were mentally challenged, three children and two grandchildren; all residing in a single wide trailer. The two dogs lived in the backyard. Lynit and another neighbor Steve McDonald have been buying food for the dogs for years.

Coco, a brown and white approximately 5-6-year-old male is a real sweetheart and used to be an indoor dog. He is house-trained and gets along with other dogs and cats. Surprisingly, he also gets along with skunks! Last winter he had a young skunk living in his dog house with him, and they used to cuddle together to stay warm.

Blackie, 3-4 years old, sadly, has lived on a chain his entire life. He’s fine with people, but it is unknown how he interacts with other animals.  He has been very sweet and affectionate with Lynit.

It’s sad enough that these two dogs were left outdoors at the end of chains, but what makes it worse is Coco and Blackie could not even keep each other company as their owners had them chained apart from each other, and their dog houses faced opposite directions. The landlord is not aware that the tenants have left the property. Lynit is worried when he finds out, he will call the local animal control. Since there is no animal shelter in this area, Coco and Blackie will be immediately put down.

Lynit has put a plea out on Facebook for someone or a rescue group to intervene and take Coco and Blackie. She cannot take them as she has no room, and her landlord will not allow her to have them. The landlord will most likely be showing up on the property around October 3 or 4. Then he will find out the residents have left and most likely call animal control.

It is an extremely urgent situation for Coco and Blackie.  They have been wronged twice; first by being made to live at the end of a chain not even able to socialize with each other. Now the same people who made them live like this have just abandoned them as if they were garbage; not caring at all what may happen to them. If it weren’t for Steve and Lynit, these dogs would’ve starved.

Any interested person(s) or rescues that can help Coco and Blackie are asked to email Lynit Patterson-Sallion at lynitpatterson@gmail.com

Yesterday in the news: Dog recovering after someone used him as target practice – more here.

Horse reunited with owner 10 years after being stolen!