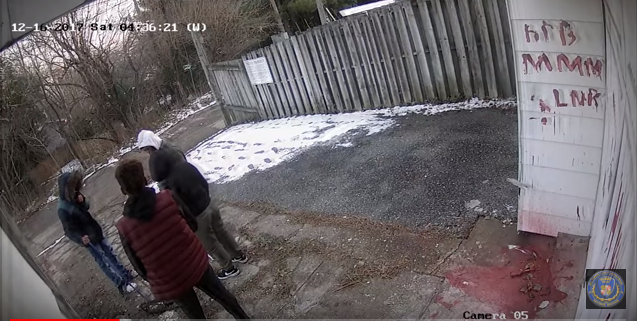 Two teenagers, accused of setting a cat on fire in Baltimore, Maryland, have been arrested and they are facing felony animal cruelty charges. According to CBS Baltimore, the male teens are 13 and 15 years of age – their identity has not been released.

The teens involved were caught on surveillance video – the grim footage shows a group of teens assaulting a cat and then setting the cat on fire; the incident was recorded on the afternoon of December 16 in the 5100 block of Harford Road. Baltimore Police spokesman Det. Donny Moses described the torture the cat suffered:

“Beating a cat, stabbing a cat and, of course, while the cat was still alive, they set it on fire and they really thought it was quite amusing.”

A resident in the area witnessed the cruel incident and called 9-1-1; by the time that help arrived, the cat was dead. The authorities are still searching for the other people observed torturing the cat in the video. Tips/information can be called  in to 443-681-0101 or Metro Crime Stoppers at 866-7LOCKUP.

The Baltimore Police have posted the surveillance video on YouTube – a word of caution, the footage is disturbing.