A teenager is New York is accused of a heinous act of animal cruelty which left an otherwise healthy dog dead of starvation. According to multiple sources, in November, 17-year-old Destiny Bradway moved out of her home in Thurman and left a pit bull mix named Ace behind. 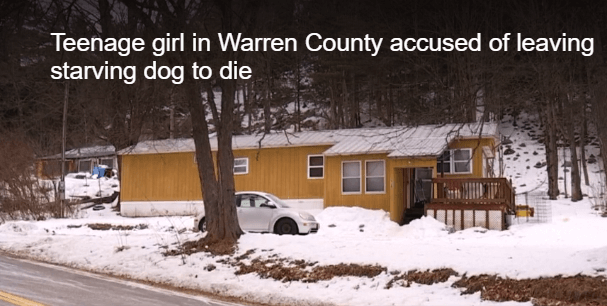 By the time Ace was found, he weighed just 10 pounds – he had starved to death on the porch of the house where his family left him behind. A necropsy on the dog’s body revealed no underlying health conditions – he simply died after being left in the cold without food or water.

The humane officer for Warren County calls it one of the worst cases of animal neglect he has ever seen, reports WNYT News.

Bradway claims that she returned occasionally to feed the dog, but the authorities do not believe her. She is facing multiple charges, including misdemeanor animal cruelty and non-criminal failure to provide sustenance. Her mother, 55-year-old Jennifer J. Brown, is facing charges of misdemeanor endangering the welfare of a child for leaving her daughter and granddaughter in a home without heat, reports The Post Star.

A dozen caged cats abandoned in the snow
Scroll to top