A California animal shelter has admitted that mistakes were made after a German shepherd puppy was put down. According to KMPH News, the young dog had been brought in as a stray, but she was put down the morning after her stray hold was up – even though a woman had told employees at the Central California SPCA that they were coming to pick her up.

Laika, the five-month-old German shepherd pup, had been brought to the animal shelter by her owner, who was no longer able to keep her because of landlord issues. The puppy’s owner turned Laika in as a stray to avoid fees at the shelter.

Karyn, a local German shepherd rescuer, went to the shelter and met the puppy and told the shelter staff that she wanted to tag the shepherd for rescue – she was on her way to pick up the young dog on Saturday morning when she learned that the pup had already been euthanized.

The animal shelter released an official statement about the findings of their internal investigation:

The CCSPCA has completed its internal investigation regarding the failure to release a dog at the conclusion of its stray hold period to one of our partner rescues in northern California. It is our determination that proper rescue procedures were not followed. Appropriate corrective actions are being taken and proper procedural training will be reinforced. We are saddened that the dog was subsequently euthanized for behavioral and illness related issues. The CCSPCA is deeply committed to providing the best possible care to the tens of thousands of animals that come through our doors each year and to providing the highest quality public service to our community.

In the news yesterday: Dog too depressed to get up after being surrendered – read more here. 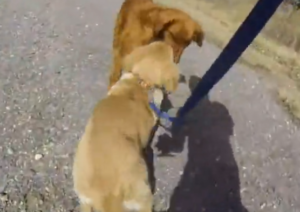