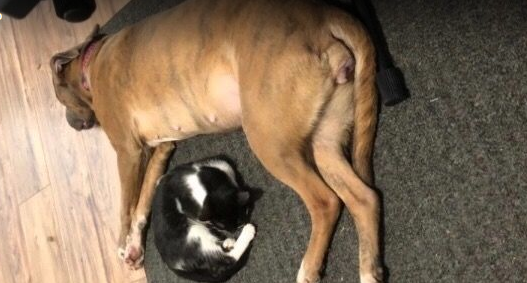 A dog, seized from her family in Troy, New York, after getting into an “altercation” with a neighbor’s dog, has been granted a temporary reprieve from death. The mixed breed dog, Luna, has been granted a 10-day “stay of execution” by Rensselear County Court Judge Jennifer Sober – the time has been provided to allow Luna’s owner, Cade Saba, time to appeal the city of Troy, which wants the dog to be put down.

Luna was seized and taken in at the Mohawk Hudson Humane Society after she got into a spat with a neighbor’s small dog in their shared backyard. The other dog sustained “minor” injuries which required a few stitches to repair. Though this was Luna’s first behavioral mishap, the city has strict dangerous dog rules which put her at risk of being put down.

Though Luna’s family is fighting for her life – the city has stated that the owner refused to the terms set forth which could have prevented Luna from being destroyed. The statement about the owner’s decision reads, in part:

The settlement reduced the fine, required the owner to muzzle and restrain the dog when it is outside, agree to reimburse veterinary bills to the family of the dog that was attacked, and require Luna’s owner to purchase insurance to guard against losses in future event. These requirements are set forth in the City Code. Tragically, Luna’s owner refused the terms of the agreement that would have spared the dog’s life.

It is not the City’s wish to see any dog euthanized, but we take seriously the responsibility of preventing similar situations from occurring again in our community.”

Prior article about Luna here.

Yesterday in the news: Someone threw a healthy young dog into a garbage can – more here.

Warrior: Fighting back the neglect at brink of dying