You are here: Home1 / News2 / animal cruelty3 / Reward offered – someone shot and killed a pregnant dolphin

On Monday, the Humane Society of the United States (HSUS) announced the offering of a $2,500 reward for information leading to the arrest and conviction of whoever fatally shot a pregnant dolphin. According to HSUS, the dolphin would have given birth soon if she had not been killed.

In late April, someone shot the dolphin in Waveland, Mississippi. HSUS stated:

After her preserved remains were closely examined in mid-July , authorities determined that her death was not a routine stranding, but was the result of being shot.

Shooting a dolphin, or any marine mammal, is a federal crime, punishable by up to $100,000 in fines and up to 1 year in jail. HSUS stated:

Dolphins are generally unafraid of boats and people and their graceful appearance and playful behavior has made them a much beloved animal by the American public.

“It takes a truly callous person to shoot such a beautiful animal,” said Sharon Young, the marine field director for the Humane Society of the United States. “The fact that she was pregnant and close to giving birth makes this a double tragedy. We hope our reward will help federal law enforcement officials find the perpetrator of this horrible crime.”

The National Oceanic and Atmospheric Administration is investigating this case. Anyone with relevant information is asked to call the NOAA Enforcement Hotline at 1-800-853-1964 or the Slidell, Louisiana, Enforcement Field Office at 985-643-6232. Tips may be left anonymously.

Man jumps off a bridge to save his dog – read more here. 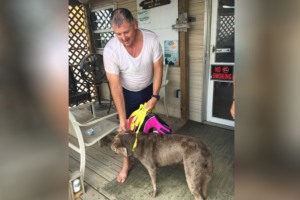 Dog thrown out in garbage bag pokes his head out as if to say ‘help m...