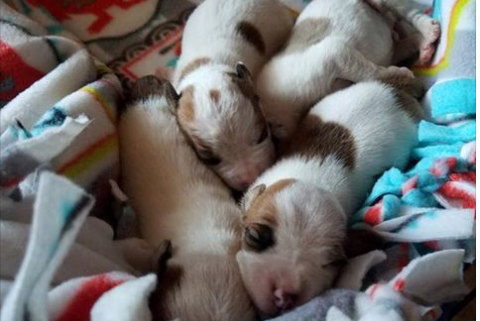 A $5,000 reward has been offered after a heartbreaking discovery was made inside of a dumpster in Nottoway County, Virginia, earlier this month. The reward, offered by People for the Ethical Treatment of Animals (PETA), is in conjunction with the January 6 finding of six abandoned puppies who were tossed into a dumpster on Davis Mill Road.

The 10-day-old puppies were inside of a green-and-white Southern States Complete Sport 24/20 dog food bag – two of the young pups did not survive, the others are being cared for by Sanctuary Rescue. According to WRIC News, two weeks earlier, four newborn puppies were found abandoned in a dumpster on Bible Road in Crewe – 11 miles away from the spot where the six puppies were found.

“At least one person out there stuffed defenseless puppies into a dumpster in the dead of winter and walked away. PETA urges anyone with information to come forward immediately so that whoever left these dogs to die can be held accountable and stopped from hurting anyone else.”

Anyone with information is urged to call the Nottoway County Sheriff’s Office at 434-645-9044.

Recently in the news: Dog trainer makes Facebook post offering free training to people who give up their pit bull

Will anyone come to save a 12-year-old dog being held in busy animal contro...
Scroll to top