You are here: Home1 / News2 / Horses3 / Rescuers save horses neck deep in water after their owner hospitalized 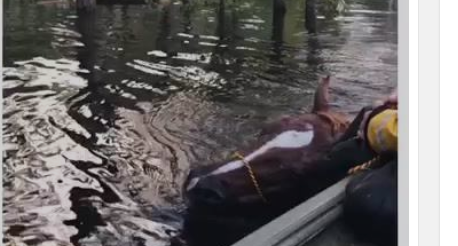 Rescuers saved horses who were trapped neck deep in flood waters in the aftermath of Hurricane Florence. According to Sweet Paws Rescue, the horses were found in Burgaw, North Carolina – the organization recounted the dire situation:

These horses were in rising water and were already in a high spot which they were going to lose to the water shortly. We found a nearby house that still had a porch above water but we had to swim them.

The Paint was larger and had an easier time but the smaller filly struggled. She started to give up about 50 yds from the porch, her left eye actually started to close, and Brett (that you see in the video) was actually holding her head above water with his foot.

Contrary to social media speculation, the horses were not abandoned by their owner – the rescue group informed Facebook followers that the woman had intended to ride out the storm at home with her horses but she had to be air lifted from her home and hospitalized.

The video of the rescue shows how frightening the situation was.

Yesterday in the news: Millions of animals dead after storm floods – more here

Inspiring – Neglected dog with massive tumor has undergone surgery. Look at her now!

A sweet reunion sure to make you smile!