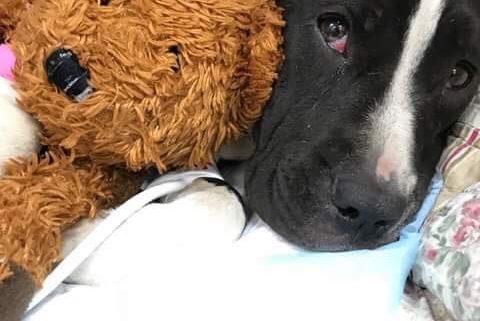 On Sunday morning, the rescue agency caring for an ailing puppy, dumped on a road, released an update to concerned individuals who have been following the tragic story. According to Chip N Snip, the black and white pup, dubbed Republic, is still weak, and tests have not revealed what is causing her poor condition.

What is known so far about this ailing puppy

The organization offered an explanation about what is known so far:

She has an serious infection that seems to involve her GI system. She isn’t eating on her own and remains on tube feeding. Republic also has IV medications continuing. She is still weak and frail but she is not paralyzed. Her condition (serious infection, septic) is causing her weakness along with nausea and diarrhea.

Extensive veterinary tests have been performed on Republic, but a definitive answer has not yet been found. In the interim, she is receiving round-the-clock care to keep her comfortable.

Last week, a woman was caught on video dumping Republic on a road in Texas. After being confronted by two people who were taking a video, the woman picked up the puppy and placed her in the back of a pick-up truck…all the while, the puppy who had been abandoned remains motionless in the bed of the truck. Though the woman in the video claimed that she would take the puppy to an animal control agency, the pup was later discovered abandoned once again. Read more here.

Chip N Snip is collecting funds for this puppy’s ongoing care via PayPal.

According to Chip N Snip, all information about Republic, and what happened to her before she was picked up and taken to safety, has been turned over to law enforcement.

Tragic update about dog who was purposefully set on fire