You are here: Home1 / News2 / Dogs3 / Police K9 shot and killed after biting an officer

A police K9 in Waco, Texas, is dead after being shot by an officer on Friday. According to CBS DFW, a warrant was being served when the K9, a Belgian Malinois, bit his handler. The dog was shot and killed by another officer.

As reported by the Waco Tribune, a warrant was being served to someone at a residence on the 2000 block of Seneca Avenue. Waco police Officer Garen Bynum told the news agency, “another officer on scene was forced to put down the canine to save the officer.”

The injured officer was taken to an area hospital and treated for minor wounds. The police K9’s name has not been released. A post on Friday evening by the Waco Police Department asked for prayers for the department’s K9 team. 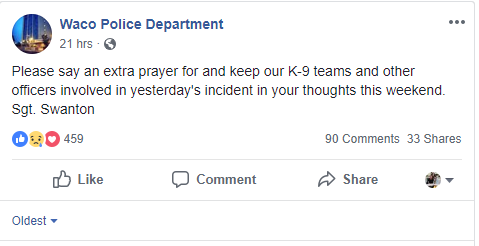 Yesterday in the news: Over 50 dogs seized from rescue after reports of neglect – more here.

More news: Amazing shepherd at risk of being put down – read more about Krypto here.

Very good boy ‘radiates goodness’ and he needs a home