A police K9 is dead following an accident with a man who was arrested for felony DUI, reported ABC 4 News.  K9 Mojo and his partner were in a North Charleston Police Department cruiser, while en route to a burglary call, when they were struck by a vehicle driven by 37-year-old Richard Shore on Thursday night. 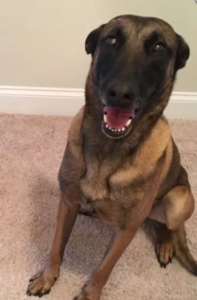 On Friday, the North Charleston Police Department alerted Facebook followers that the grievously injured K9 had passed away during the night:

K-9 MOJO passed away overnight as a result of a collision that he and his handler K9 VanAusdal were in. Officer VanAusdal was responding to a call of a burglary in process.

Mojo’s partner, Officer VanAusdal, was seriously injured in the accident; he was taken to MUSC for treatment. Mojo had served with the police department for over five years. Chief Reggie Burgess commented on the tragedy:

“I ask that each of you keep the families of our beloved Brothers MacCluen and K9 MOJO in your thoughts and prayers. And we pray for a full and speedy recovery for PFC VanAusdal. You can rest assured that the department, as well as the city, will be there for them during this difficult time.”

The department was struck by two separate tragedies on the same day – Ryan MacCluen, an off-duty officer who had been with the department since August 2016, was killed in Summerville after a vehicle struck him while he was riding a motorcycle.

Story idea? Please email Eims1@live.com for consideration
Next: Pit bull found wrapped in a blanket and thrown in the trash
Recently in the news: Sickly puppy given away for free because she couldn’t walk