You are here: Home1 / News2 / Dogs3 / Police dog loses most of his teeth while apprehending suspect

A police dog in Santa Ana, California, has lost most of his teeth after apprehending a fleeing suspect. According to the Sacramento Bee, the eight-year-old Dutch shepherd, Puskas, was injured on Monday while helping to apprehend a man in Irvine.

In the midst of capturing the suspect, Puskas lost all but his canines; the Santa Ana Police Department updated Facebook followers about the incident:

“Due to large response about #SantaAnaPD#K9 Puskas we are providing an #update– During last night’s suspect apprehension Puskas lost all of his upper & lower teeth, w/ the exception of his canine teeth. He is currently in surgery @yorbaregionalah to repair the damage

Puskas made it through surgery and was able to head home to recuperate. On Tuesday, the Department wrote:

Puskas made capturing suspect Antonio Padilla Jr., possible – the man is accused of carjacking and nearly running over a police officer, in addition to violating his parole.

This K-9 can absolutely FLY! Watch as this wild Southern California police chase comes to an abrupt end after a K-9 sprints and leaps into action, tackling the suspect to the ground and holding him there until his partners arrive to cuff him.

Story idea? Please email Eims1@live.com for consideration
Recently in the Pet Rescue Report: German shepherd shot in the face for barking
In other news: Dog continues to wait for a home…four years in a shelter 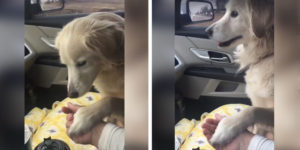