The owner of a nationally certified human remains detection search dog is seeking answers after someone shot the dog near his home in Freeburg, Illinois. The dog, a black Labrador retriever mix named Rowdy, was shot with a pellet gun or air rifle in the Meadowbrook subdivision on August 7.

As reported by the Belleville News-Democrat, Marla Vollmer, Rowdy’s owner, found her dog around 7 p.m. on Tuesday evening – the dog was still alive, but grievously injured. Vollmer rushed Rowdy to a veterinarian, but he couldn’t be saved. Three days after the shooting, Rowdy died from severe internal injuries.

Information needed to solve the crime

A $2,100 reward is being offered for information leading to the arrest and conviction of whoever is responsible for shooting Rowdy. Vollmer is hopeful that the reward will entice someone to come forward. She said, ““I pray that whoever did this comes forward,” adding, “I just want to know why.”

Anyone with information about this cruel incident should reach out to the Freeburg Police Department at 618-539-3132.

Rowdy worked with Gateway Search Dogs Inc. for over six years – he was adopted from the Belleville Area Humane Shelter in 2009. 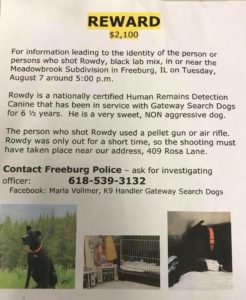 Dog shot and killed while in Oklahoma foster home