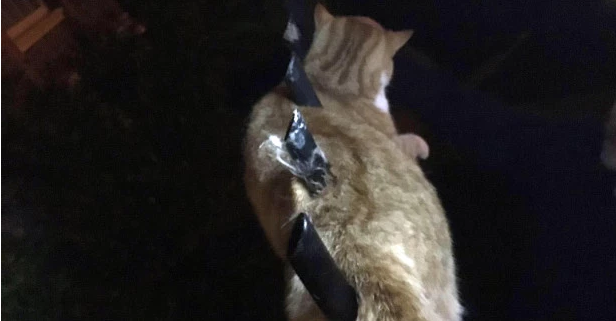 A cat used up most, if not all, of his nine lives when he was impaled by multiple fence posts. The shocking situation was discovered early March 9 in London – in a release, the RSPCA has pleaded for information about the alarming incident:

We’re appealing for information about a cat found impaled on metal fence posts in London in the early hours of Friday, 9 March – as the puss recovers from major surgery which saved his life.

Deputy Chief Inspector Nicole Broster rushed to the scene after an alarmed passerby alerted the animal welfare agency about the concerning situation. Inspector Broster recounted her concern over the cat’s fate:

When I took the emergency call about a cat impaled on fence posts, I was extremely worried and couldn’t believe that the cat was still alive. When I got there I was incredibly shocked – in all my years with the RSPCA I’ve never seen anything like it. This poor cat literally had two metal posts protruding through his body.

Despite the cat’s obvious pain, he remained affectionate – purring and nudging those who were trying to help. The inspector knew if she tried to free the cat herself, she might cause more damage, so she called the London Fire Brigade for help. The fire service responded with specialized equipment and they were able to cut the fencing and free the cat. 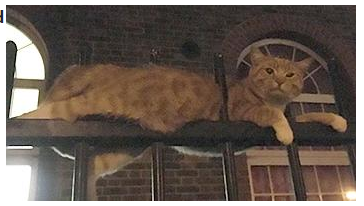 The kitty, whose name is unknown, was rushed to a veterinarian for life-saving surgery. Somehow, the posts had managed to miss all of his vital organs and he is doing remarkably well given the circumstances.

It’s an absolute miracle that this cat is alive, and even better, it’s looking like he won’t even have to have the damaged leg amputated. In fact, he’s doing so well he’s already up on his feet and walking which is astounding, I can’t quite believe how lucky he is.

He’s still not out of the woods yet as there’s a risk of infection from where the metal posts were inside his body, but the vets have done an amazing job in saving his life. He’ll be moving to an RSPCA hospital this week for further care.

Anyone with information about the cat, or how he came to be impaled on the fence, is asked to call the Inspector appeal line on 0300 123 8018.

(Images via RSPCA and SWNS screenshot)

In other news: Teacher under investigation for feeding a puppy to a turtle

Bonded friends just want to be loved, but nobody wants them