A neglected puppy, with a grossly swollen stomach, was saved moments before she was scheduled to be euthanized. According to HART Cincinnati, the owners of the 10-week-old beagle puppy tried to surrender her to multiple shelters in Kentucky – all of the facilities refused to take her until the final shelter was visited. According to the rescue group, the final stop agreed to take the neglected puppy in and because of her dire condition, they were making plans to euthanize her.

This baby would eat and drink while continually expanding, and could no longer walk. The final shelter agreed to take her and was preparing to euthanize. Our Kentucky shelter contact sent out an urgent plea and we quickly responded. 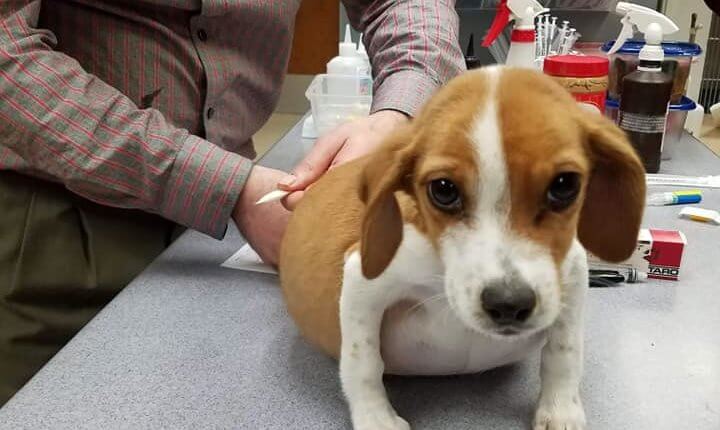 The pup, dubbed Clarice, was taken to a veterinarian and the fluid was drained from her stomach. The rescue agency said,

She tested positive for whipworms but other tests are due back tomorrow. A sonogram was done today on the “pouch” she carries on the left side. Most of her organs are houses in this “pouch.” Now that the fluid is gone, it is obvious that she is emaciated. Her entire skeleton is visible. She is super happy that she can walk!

In addition to being starved, Clarice is severely anemic.

Anyone interested in making a donation toward’s Clarice’s care can do so at this link to the rescue group.

More: Puppy recovering after being thrown from moving vehicle – the story here.

So confused – senior dog returned to busy shelter by his adopter