In a most disturbing account of a Lawton, Oklahoma animal abuse case, the owner of a six-month-old Dachshund puppy cried on Monday evening after he checked his home surveillance camera to find his four-pound Dachshund puppy had been severely tortured by a local nasty kid. 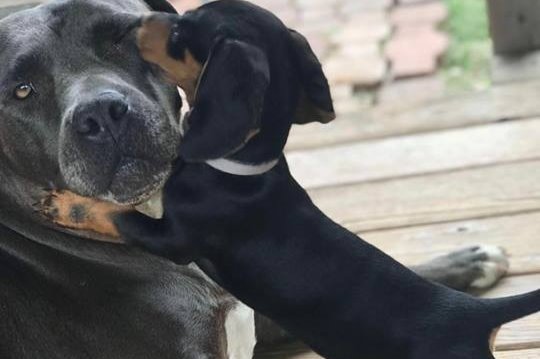 According to Wave 3News, the puppy’s owner David Winbush and his family had been out to dinner, but when they arrived home could not find the Dachshund pup named Sprocket in their own backyard where he had been left. It was then Winbush checked his surveillance camera. Video showed the nasty kid grabbing Sprocket and then carrying the four-pound puppy to the backyard hitting the defenseless animal repeatedly. He then threw the puppy around, beating and kicking it at the same time on four separate occasions.

“He comes back with a baseball bat for the final time and then just strolls out of the driveway like nothing ever happened,” Winbush told news media.

Wimbush recognized the child and and went over to the grandparents’ home, but no one was there. When contact was made, the relative caring for the kid viewed the shocking video.

Poor little Sprocket was found hours later; he had been trapped under a slab of concrete laid on top of him underneath a shed. The puppy was alive, however he suffers from a broken hip and two broken legs.

To help with Sprocket’s medical care, a GoFundMe account has been established.

The graphic and disturbing video can be viewed at this link. BE ADVISED it may not be suitable for all viewing audiences.