You are here: Home1 / News2 / Dogs3 / Man wrestles with bear to try and save his dog from being killed

A man visiting Jasper National Park, in the Canadian Rockies, jumped out of his car and wrestled with a bear in an attempt to save his dog from being killed. According to CBC News, despite the man’s attempts, the dog was killed by the black bear.

What happened before the bear attack?

The deadly situation happened after the man’s dog jumped out of the open window of his car and started barking at the bear. Not surprisingly, the bear responded aggressively. The man desperately tried to save his canine companion, but the dog was no match for the wild animal.

While the dog’s owner’s response to the attack is commendable, it is not recommended. Steve Malcolm, a human-wildlife conflict specialist for the park, commented on the situation:

“It’s an instinctive reaction and one that we don’t condone.”

“Really, the fellow is really lucky that he was able to pull that off, but it didn’t change the outcome, and certainly our message is: Absolutely never do that.”

How did the man survive?

The man who decided to wrestle a wild animal is lucky to be alive – experts believe that he only survived because the bear was actually fixated on killing the dog. Obviously, taking on a bear, or other wild animal, is never advisable. 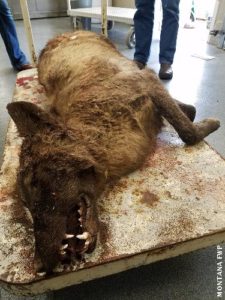