You are here: Home1 / News2 / animal cruelty3 / Man accused of repeatedly throwing dog to the ground and choking her 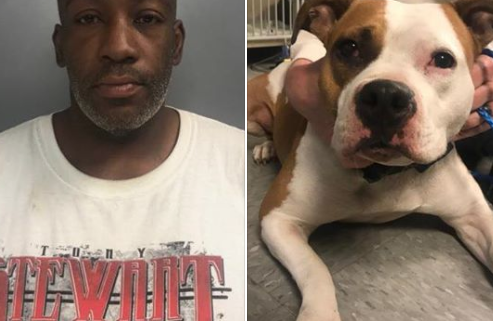 A New York man was arrested and is facing charges for allegedly attacking a dog outside of a McDonalds Restaurant in Bay Shore. According to the Suffolk County SPCA, 47-year-old William Anthony Roberts was arrested after a witness claimed to have seen him choking a dog and repeatedly throwing her to the ground.

The authorities did not have to rely on simply a witness statement because the act of cruelty was captured on video. The animal welfare agency wrote:

An eyewitness video shows the dog being choked, lifted off its feet by the collar and repeatedly thrown to the ground. The video was broadcast on social media by a concerned citizen.

The dog, a pit bull named Princess, was also located – she has been taken to a veterinarian to be evaluated.

Cruelty will not be tolerated

More: Dog found clinging to life after being shot and abandoned – the story here.

Yesterday: Red alert – senior dog is shelter’s longest resident and she needs out.

Psychologists claim your dog isn’t overly smart – do you believe...
Scroll to top