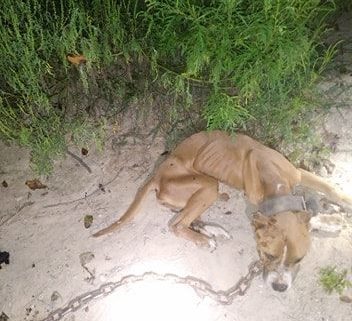 Last weekend, a lifeless dog was found chained in the woods near a home in Laurens County, South Carolina. The dog, dubbed Courage, was so weak that he was unable to stand.

On Sept. 9, the Heart of LAC recounted what had taken place before the dog was discovered:

Late last night, as most of us were getting ready for bed, a Laurens Animal Control Officer responded to a call. When he arrived he found a burned out house, and three dogs chained out front. As he was checking out those dogs, he heard something else…a faint cry from deep in the woods behind the house.

Following the sounds, about a half mile into the woods, he found this dog. Chained with a logging chain, and not able to stand, the Animal Control officer picked his nearly lifeless body up, and carried him a half mile back to his truck.

The officer transported the emaciated dog to a veterinarian for care. 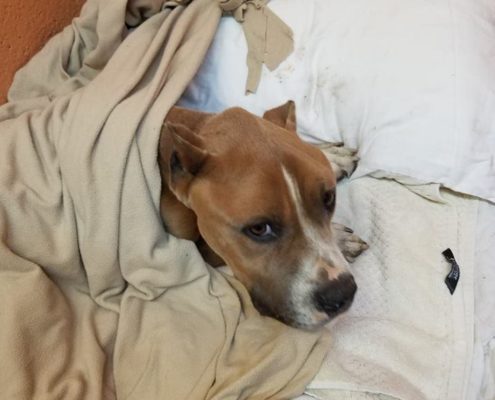 Although he was weak, he wagged his tail. He ate some rotisserie chicken. He gulped down some medicine. He knew he was safe.

This dog has been named Courage. He weighs 38 lbs, but should be about 65 lbs. He was chained up and not fed for weeks, but he willed himself to survive.

DONATIONS: Clinton Animal Hospital at 864 833 2487 and let staff know that the donation is for Courage’s medical care.

Search for the abuser

As reported by WYFF News, deputies have identified Michael Christopher Yeargin, of Foothills Trail in Gray Court, as Courage’s owner. Anyone with knowledge of his whereabouts is asked to call the Laurens County Sheriff’s Office at 864-984-4967 or anonymously at 864-68-CRIME.

Spa treatment for dog who spent 13 years on a chain…