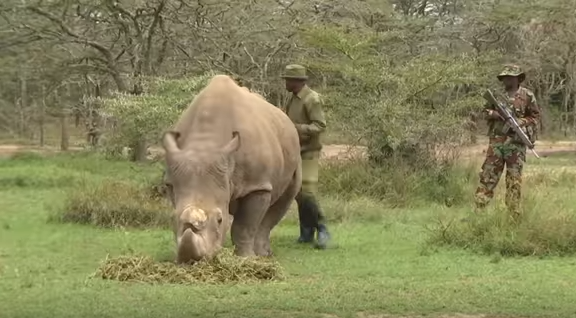 The world is mourning the death of the last male northern white rhino, Sudan. The 45-year-old rhino had to be humanely euthanized for age-related maladies which made his quality of life poor. According to BBC News, Sudan, who lived at Kenya’s Ol Pejeta Conservancy, was euthanized on Monday.

There are now just two female northern white rhinos which stand between the species’ total extinction – the survivors are Sudan’s daughter Najin, and his granddaughter, Fatu. The northern white rhino was poached (for their horns) to near extinction in the 1970s and 1980s. At this point in time, the only hope for continuing the rare species is IVF (in vitro fertiliztion).

Those who knew Sudan remember him as a gentle giant who didn’t have a mean bone in his body. His condition had deteriorated significantly just before the decision was made to humanely end his life.