In Indonesia, a 54-year-old woman’s body was found in the belly of a giant python on Friday. The woman, Wa Tiba had been in her garden on Thursday when she disappeared in the village of Persiapan Lawela, on the island of Muna.

According to Global News, residents suspected the 23 foot python  had swallowed the victim.

“Residents were suspicious the snake swallowed the victim, so they killed it, then carried it out of the garden,” the Muna police chief wrote. “The snake’s belly was cut open and the body of the victim was found inside.”

Neighbors searched for the woman when she failed to return from tending her garden, and soon found Wa Tiba’s sandals, torch and machete near where the bloated snake had been resting.

Wa Tiba’s body was found intact, still dressed inside of the snake that had swallowed the woman head first. The garden, which was located about a half-mile for her home is in a rocky area with caves and cliffs in an area believed to be habituated by many snakes. Pythons are prevalent in Indonesia and southeast portions of Asia. They grab onto their victims with their teeth and squeeze their prey to death before swallowing them.

It is very unusual for a python to attack a human, their usual bill of fare remains with eating monkeys, pigs and other mammals. 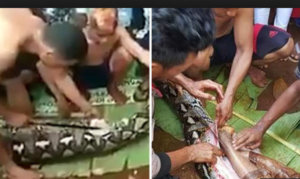 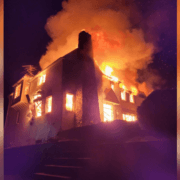 Oops! Family burns down home while trying to get rid of snake infestation
2 replies

Homeless woman fatally beat puppy who belonged to woman that offered her he...