In southwest Florida, a rare Florida panther was caught on video seen running and capturing a family cat in its jaws and then carrying it off as prey on Sunday. It has been assumed the cat was dead by the time the panther carried it away in its jaws.

The graphic video was captured on a home surveillance system and posted on LiveLeak by D3ph3ult.

According to Florida Fish and Wildlife Conservation Commission, the panther attack occurred in the Golden Gate Estates area of Collier County located near prestigious Naples. Other panthers have previously been spotted throughout other parts of Florida including Osceola, Orange, Seminole, Brevard, Volusia and Flagler counties.

Homeowners in the area have been notified of the sightings.

“FWC has set up a sign at the entrance of the neighborhood with brochures about living with panthers, and staff are also going door to door to notify residents that panthers are in the area and to educate them on how to reduce conflicts with these animals.” 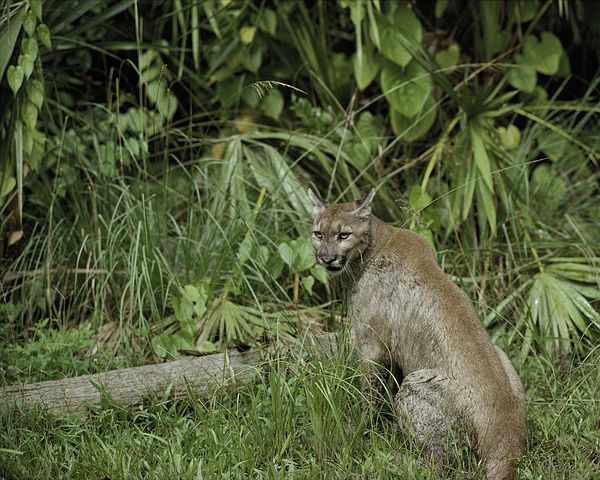 Residents are reminded to protect house pets and keep them indoors or in a predator-resistant enclosure – especially at night. Not only are panthers placing domestic pets at risk, wildlife experts also warn against bears, coyotes and bobcats. The Panther Sighting Registry states:

“Florida panthers are the larger of Florida’s two native cat species (panthers and bobcats). Although most panthers are found south of Lake Okeechobee, they have been documented throughout the peninsula and even into Georgia. Female panthers have only been documented in south Florida so that is where all known breeding occurs. Panthers are listed as an Endangered Species under the Endangered Species Act. There are approximately 120-230 adult panthers in the population.”

Tips for residents to reduce predators in their neighborhoods and yards can be found here.

(Photos of panther attacking cat via freezeshots from video)

Orangutan faced off with bulldozer as machine destroyed one of last habitat...
Scroll to top