Firefighters assigned to the #HolyFire from the Los Padres National Forest made a difference today in the life of this baby deer who was heat exhausted and dehydrated. They provided her with water and helped her get back on her feet. #OhDeer 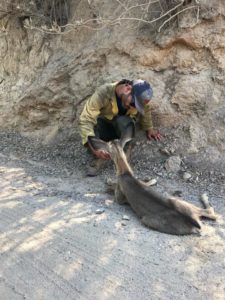 The person accused of starting the devastating fire

The massive wildfire, which began earlier this month in Holy Jim Canyon, is believed to have been started purposefully by Forrest Gordon Clark, an “eccentric” man who has been described as a trouble-maker. The 51-year-old man was arrested on August 7 and he is facing multiple charges, including aggravated arson, arson of inhabited property, arson of forest, making criminal threats and resisting arrest.

Firefighters are making progress on the fire, but it was still only 59 percent contained as of Monday. The blaze has devastated thousands of acres. The fire will hopefully be contained by Friday, August 17 reports the Express U.K.

Yesterday: Puppy will get a new home, despite judge’s decision to let owner, accused of abuse, off the hook – more here.

In other recent news – Someone dragged a stray dog over a mile behind a car – more here.

Bernadette, 15-year-old dog waiting to be saved from busy shelter

Search warrant served in investigation of ‘Cargo’ aka ‘Valerie’...
Scroll to top