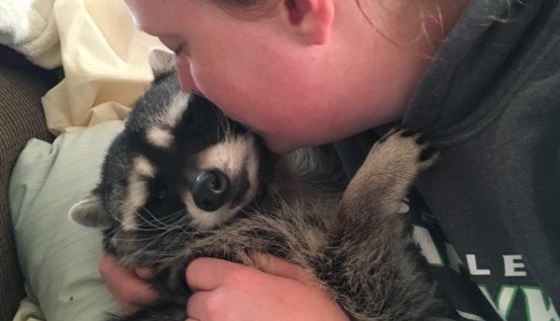 A West Seattle, Washington, family is devastated to learn that a judge has ordered that their pet raccoon, Mae, must remain in captivity at a wildlife rehab center until a trial is held to determine whether or not the state seized her legally. According to King 5 News, attorney Adam Karp argued that Mae should be allowed to remain with the only family she has known until the trial, but Judge Carol Murphy sided with the state and ordered that she remain held at the wildlife center.

Mae was raised by Kellie and Chris Greer, who found her seven years ago at a park near the body of her deceased mother. The couple had tried to turn Mae over to a wildlife center when she was just a cub, but after failing to find one to take her in, they turned to Wolftown, on Vashon Island, and were granted permission to become a “subpermittee,”which allowed them to keep the wild animal, as long as certain rules were followed.

Unfortunately, Wolftown has since closed down and in the eyes of the state, the Greers no longer have the legal right to keep the raccoon who has spent her entire life with them. In fact, the state believes that Mae is a threat to public safety. “A first-generation wild animal may have lost its fear of humans, but it is not a domestic animal. It still presents a threat to the humans around it,” said Assistant Attorney General Senior Counsel Neil Wise.

Mae’s family worries about their pet’s well-being during her time of captivity. Before being seized, she enjoyed walks (on a leash), bath time and even camping trips. Now, she is living in a cage.