A few short weeks after being adopted from California’s Orange County animal shelter, a dog was found near death on the street – a witness reported seeing her thrown from a small, dark-colored car by two black men. Days ago, Ghetto Rescue Ffoundation (GRFF) answered the call for help and responded to the area where the dog was dumped.

Trying to assess her prior to loading her. Heartbreaking situations daily. We are currently driving to get her to a local Vet and calling her Precious Cargo for tonight!

💕
*if you missed our outreach post we were looking for help picking this dog up. She was thrown out of a vehicle by two make, Blacks with numerous tattoos in a small dark colored car at 85th and Main. She won’t move,she’s dehydrated and broken somehow.

Though “Cargo” was taken to a veterinarian for emergency care, she did not survive. GRFF broke the devastating news on Tuesday:

Sad update, we really are having a difficult time writing this one.

💔 Cargo passed away about one hour ago, and we are in tears. We were all so hopeful, as were you. She was comfortable, and on pain medication. The only thing we can be thankful for is she did not die on the sidewalk alone. Other than her vagina trauma nothing was obviously wrong. No scrapes or abrasions.

In the midst of writing the Facebook post about Cargo’s passing, GRFF learned that a ruptured aorta was behind the dumped dog’s death. The group wrote, “Vet suspects trauma to the chest area. We know based on her sad demeanor she was mistreated in the short time she was out of the shelter.”

More about the abandoned dog

*She was chipped and had been adopted July 23rd from the Orange County Shelter. We contacted the person who was listed as the adopter but the person we reached out to is not the adopter. We will be contacting the OC shelter too.

Tuesday: Outrage after protective mother cow and her calf are slaughtered – read why here.

In other recent news – Woman charged for leaving 2 dogs inside of hot house without food or water. More here.

Man trying to save puppy from being abused was shot and killed – read more here. 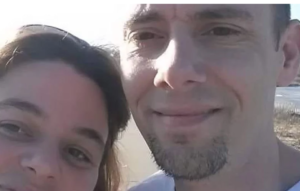 Heartbreaking end for dog who was dragged behind truck – read more here. 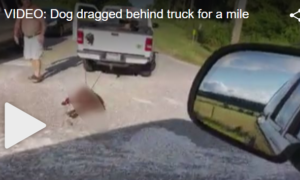 At 13-years of age, Rascal’s family surrendered him to a busy shelter
Scroll to top