You are here: Home1 / News2 / Adoptable dogs3 / Duke’s family gave him up on Clear The Shelters Day and he is so... 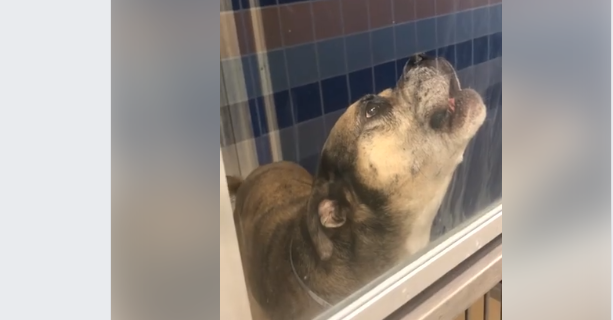 As hundreds of pets were finding new homes on Clear The Shelters Day, a dog named Duke found himself homeless. The five-year-old bulldog mix, Duke, is clearly lost without his people – he sits in his lonely kennel run and howls for the family he has lost.

A plea for help

On August 21, an advocate for Duke wrote:

This heartbroken boy is Duke #A1583096 listed as a 5 year old Bulldog mix. While many people were adopting their new family member on clear the shelter day Luke was abandoned at the shelter by the people he loved the most

😔I will never get used to see the devastation that owner surrenders go through. Duke is a very calm and sweet boy, a little shy at first but he’s getting used to his surroundings and new people. He doesn’t mind other dogs.

Is anyone interested in a sad, middle-aged dog? He is “just” a mixed breed…and no longer a puppy. Does anyone want to give him a home? Hopefully there is one person out there who will be compelled to offer this deserving dog the loving home that he so badly longs for.

More information about dog who was buried alive