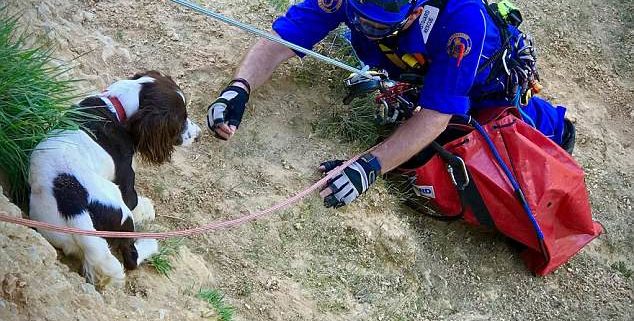 A Springer spaniel, named Bailey, survived a 200 foot fall from a cliff at Cain’s Folly, Stonebarrow, near Charmouth, Dorset as he miraculously landed on a 12 foot ledge Monday afternoon. His owners were panicky thinking their precious pet could fall further to his death.

According to the West Bay Coastguard, eight rescuers  including the teams DSO (Deputy Station Officer) responded to the station, picked up their equipment and vehicle and arrived at the location. A ‘Cliff Technician’ was rigged to retrieve the dog who seemed uninjured, and had been moving freely around the steep upper cliff levels. As the officer was lowered down to meet up with Bailey, the dog just didn’t seem interested in being rescued – he backed away each time the officer tried to get closer. 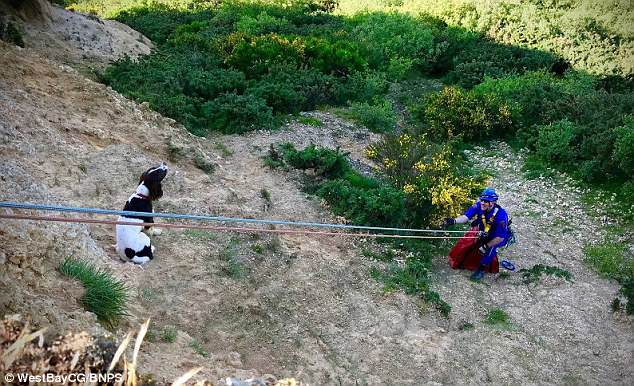 No matter how much coaxing and how many dog treats, Bailey just wasn’t joining into the rescue efforts and “a Mexican standoff developed with the dog quite unwilling to approach the strange man dressed in blue.” Instead Bailey settled on the narrow ledge.

“To try and break the deadlock, the officer was very slowly recovered up the cliff face towards the dog, which had now backed itself into a corner with no real avenue of escape.

Once the officer got within a metre of the Spaniel, the recovery was stopped so that dog and rescuer could have a period of getting to know each other,” the organization posted on their Facebook page. 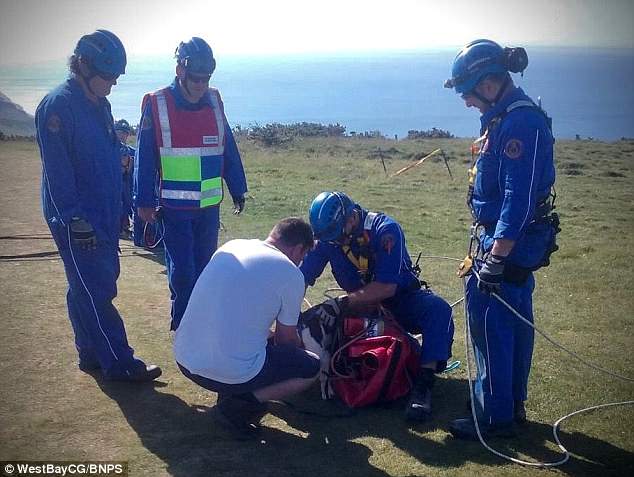 The standoff between rescuer and dog lasted for 45 minutes, but when the two were within three-feet of each other, Bailey relaxed and allowed himself to be leashed and brought to safety. Bailey, in a rescue bag, was brought to the top of the cliff where he was reunited with his appreciative owners.

“This incident had a very happy outcome and the dogs owners did the right thing by calling the Coastguard and not attempting a ‘Self Rescue’. However not all dog related incidents end this well and Coastguard advice remains clear. Always keep your dog on a lead on the cliffs, as some dogs especially smaller ones can have difficulty seeing the cliff edge, and never, ever attempt a self rescue. Instead Dial 999 and ask for the Coastguard.”

All’s well that ends well, and a shout out to all rescuers. You are very much appreciated.