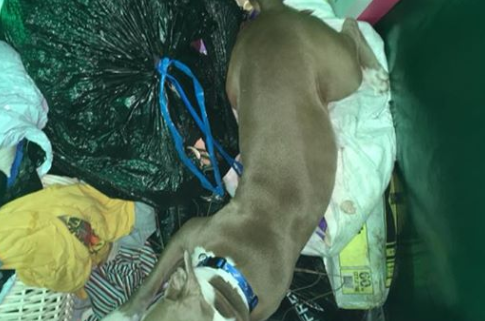 On Friday, a decidedly cruel situation was discovered by a good Samaritan outside of a shopping center in Spring Lake, North Carolina. According to the Cumberland County Animal Control, someone abandoned a live dog inside of a locked clothing donation bin.

The abandoned dog is described as a tan and white pit bull – she was discovered inside of a donation bin located outside of the Cedarwood Shopping Plaza, at 105 Lillington Highway. The donation bin was secured and the local police had to cut a lock off to reach the dog, who was described as “responsive” but weak and dehydrated.

Officials are certain that the dog was placed into the box and that she did not climb in on her own. The dog appears to be about two years of age and she was wearing a blue collar with bones on it. She does not have a microchip or identification tags.

The dog and the investigation

The abandoned dog will be held for three days to see if an owner comes forward – if nobody claims her, she will likely be placed up for adoption. Anyone with information about the dog, or this situation, is asked to call Animal Control at 910-321-6852 or the Spring Lake Police Department at 910-436-0350.

Another dog saved thanks to a good Samaritan:

Clever dog stands in the pool like a human – watch the adorable video here.

Betrayed dog continues to wait at shelter over a month after family left hi...
Scroll to top