You are here: Home1 / News2 / animal cruelty3 / Dog attacked by man with a machete after wandering into yard

A dog is recuperating from severe injuries after wandering into a yard in Hamilton, Texas, and being attacked by a man with a machete. According to KXXV News, authorities who responded to Eric Norton’s home were given a couple of stories about what happened on March 21.

At one point, Norton claimed that the black pit bull was in his yard, killing his cat, when the machete attack took place…he also claimed that he found the dog in his yard and took him inside so that he could “check Facebook” to see if anyone had reported their dog missing. Norton told the police that he put the dog in a room, forgetting that his cat was in there, and “saw red,” after the dog killed his cat.

The dog suffered a huge injury on his shoulder after being attacked with the machete. Chief Keith Madison told the news agency that the dog’s owners will be given a citation for allowing their dog to run at large, and Norton will face an animal cruelty charge – he explained:

“He’ll be arrested for animal cruelty, a Class A misdemeanor, booked in and placed in county jail. He’ll post bond to get out and the case will be presented to the county attorney’s office for prosecution and that ranges, in a penalty, not to exceed 4,000 dollars or not to exceed one year in jail or both.”

The dog’s owners have started a fundraiser to help pay for veterinary expenses – click here to read more. 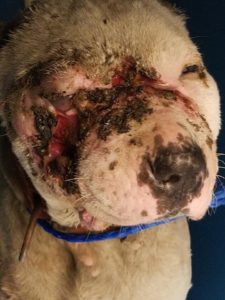 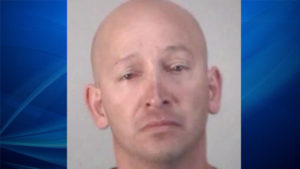